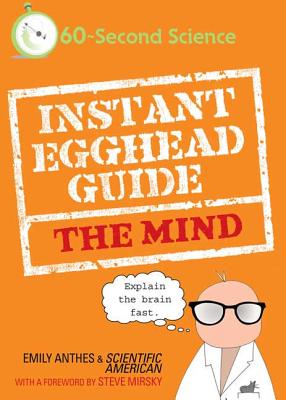 Everything from neurons to consciousness in the blink of an eye (which takes 300 milliseconds).

Take a "fantastic voyage" through the whorls and curves of the human brain, no miniaturization required. Learn everything from how quickly you can possibly think (and that left-handed people think faster) to why being bad feels so good (yes, there's a biochemical explanation).
Whether you're a fan of Scientific American's wildly popular "60-Second Science" podcast or just curious about science, you're going to love the tingly way your synapses feel after enjoying the same bite-sized knowledge in The Instant Egghead Guide to the Mind.

EMILY ANTHES is a freelance science journalist. Her work has appeared in Seed, Scientific American Mind, Discover, Slate, Good, New York, and the Boston Globe. She has a master's degree in science writing from MIT and a bachelor's degree in the history of science and medicine from Yale, where she also studied creative writing. She is the author of Frankenstein's Cat: Cuddling Up to Biotech's Brave New Beasts. She lives in Brooklyn, New York.

Scientific American is the award-winning authoritative source for the science discoveries and technology innovations that matter.