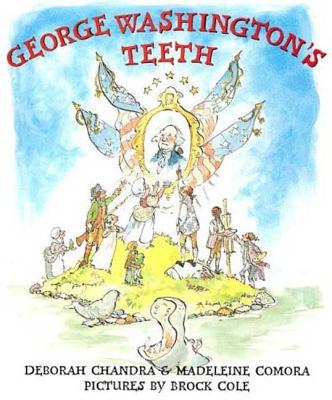 In this reverentially funny tale from Deborah Chandra written in verse and based on Washington's letters, diaries, and other historical records, readers will find out what really happened as they follow the trail of lost teeth to complete tooflessness.

From battling toothaches while fighting the British, to having rotten teeth removed by his dentists, the Father of His Country suffered all his life with tooth problems. Yet, contrary to popular belief, he never had a set of wooden teeth. Starting at the age of twenty-four, George Washington lost on average a tooth a year, and by the time he was elected president, he had only two left!

Deborah Chandra’s previous children’s books include A Is for Amos, which Publishers Weekly called “a charmer” in a starred review. She lives in Altadena, California.

Madeleine Comora is an author and poet who lives in Glendale, California.

Brock Cole was born a year before the Second World War in a small town in Michigan. Because of his father's work, his family moved frequently, but he never regarded these relocations as a hardship.
"I thought of myself as something of an explorer, even though my explorations never took me very far. I had a deep and intimate acquaintance with woodlots, creeks, lakes, back streets, and alleys all over the Midwest."

He attended Kenyon College in Gambier, Ohio, and received a doctorate from the University of Minnesota. After teaching philosophy for several years at the University of Wisconsin, he began writing and illustrating books for children.

"I had always wanted to write, and I loved to draw. I had small children, who were a wonderful audience. Children's books seemed a perfect fit."

His first book, The King at the Door, was published in 1979. Among his other picture books are The Winter Wren, The Giant's Toe, and Alpha and the Dirty Baby.

He now lives in Buffalo, New York, where his wife, Susan, teaches at the State University of New York. His sons both live in Athens, Georgia. Joshua teaches French history at the University of Georgia, and Tobiah is a painter and works as a waiter. Joshua is married to Kate Tremel, a potter and a teacher, and they have a little boy named Lucas.

Brock Cole's acclaimed first novel, The Goats, was published in 1987. It is set in the Michigan countryside of his childhood and captures the story of two loners' struggle for self-identity and inner strength after being made the targets of a cruel prank. In a Horn Book Magazine editorial, Anita Silvey wrote: "The Goats reaffirms my belief that children's literature is alive and thriving." Betsy Hearne, editor of The Bulletin of the Center for Children's Books, lauded The Goats as "one of the most important books of the decade."

In Brock Cole's second novel, Celine, sixteen-year-old Celine, a budding artist, is living with her young stepmother, only six years older than Celine herself, while her father is teaching in Europe. Celine dreams of escaping this situation, but she becomes involved with caring for Jake, her seven-year-old neighbor, who is going through his parents' divorce.

Since he began his writing career, Brock Cole and his wife have traveled a good deal, living for one year in Washington and another in Germany, as well as spending frequent summers in Greece and Turkey.

"To be honest, I simply tag along after Susan. It's her research which takes us all over the place. I enjoy it immensely, though. There's something about sitting down to work at a rickety table in a strange city that clears the head. It's the best thing for a writer, or for this one, anyway."

“This accurate and intriguing slice of history should find a place in any elementary school library.” —School Library Journal, Starred Review

“Illustrator Cole is at his absolute best here, totally at ease with the human gesture and expression. . . . This is history for youngsters that will stick; it's wild and fun and factual, without a trace of mockery.” —Booklist, Starred Review