The Sunne In Splendour: A Novel of Richard III (Paperback) 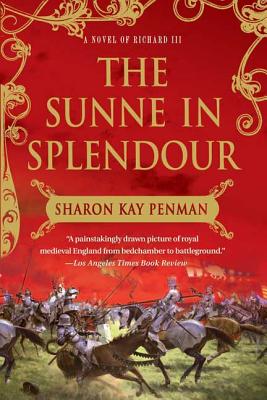 The Sunne In Splendour: A Novel of Richard III (Paperback)

In this beautifully rendered modern classic, Sharon Kay Penman redeems Richard III---vilified as the bitter, twisted, scheming hunchback who murdered his nephews, the princes in the Tower---from his maligned place in history with a dazzling combination of research and storytelling.

Born into the treacherous courts of fifteenth-century England, in the midst of what history has called The War of the Roses, Richard was raised in the shadow of his charismatic brother, King Edward IV. Loyal to his friends and passionately in love with the one woman who was denied him, Richard emerges as a gifted man far more sinned against than sinning.

This magnificent retelling of his life is ?lled with all of the sights and sounds of battle, the customs and lore of the ?fteenth century, the rigors of court politics, and the passions and prejudices of royalty.

For many years while she was a student and then a tax lawyer, Sharon Kay Penman (1945-2021) worked on a novel about the life of Richard III and The War of the Roses. After the original manuscript was stolen from her car, Penman rewrote the entire novel that would become The Sunne in Splendour.

Penman is the author of ten critically acclaimed and New York Times best selling historical novels and four medieval mysteries featuring Justin de Quincy. The first book in the series, The Queen's Man, was a finalist for an Edgar Award for Best First Mystery from the Mystery Writers of America.

“The reader is left with the haunting sensation that perhaps the good a man does can live after him---especially in the hands of a dedicated historian.” —The San Diego Union

“Those who know Richard III from Shakespeare will find that Sharon Kay Penman presents a contrasting view of the English monarch . . . He's an altogether nice man, a romantic hero as suitable to our late twentieth-century standards . . . as he was to those of medieval England . . . There is a vengeful quality to her insistence that is appealing; it makes for a good story.” —The New York Times Book Review

“Ms. Penman's novel, rich in detail and research, attempts to set the record straight . . . it is an uncommonly fine novel, one that brings a far-off time to brilliant life.” —Chattanooga Daily Times