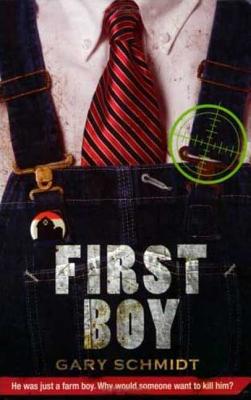 Gary Schmidt's First Boy fast-paced political thriller will have the reader turning the pages in anticipation of the next clue.

"You're my first boy, Cooper, my first boy," grandfather says just before he dies. All alone in the world, without even a dog, the only thing that keeps Cooper going is running the dairy farm.

Suddenly, black sedans are swarming all around Cooper's small New Hampshire town, driven by mysterious men in dark suits. Cooper's barn is burned to the ground, and his house is broken into and searched during the night. The President of the United States calls on Cooper for a visit, and her opponent wants Cooper to join him on the campaign trail.

Who exactly is Cooper Jewett, and what does the government want with him?

Gary D. Schmidt is a professor of English at Calvin College in Grand Rapids, Michigan. He received both a Newbery Honor and a Printz Honor for Lizzie Bright and the Buckminster Boy and a Newbery Honor for The Wednesday Wars. He lives with his family on a 150-year-old farm in Alto, Michigan, where he splits wood, plants gardens, writes, and feeds the wild cats that drop by.

“This fast-paced and suspenseful story by Newbery and Printz Award winner Gary Schmidt, set on a New Hampshire dairy farm, creates both a bucolic rural existence and scenes of political greed and ambition . . . the novel is reminiscent of Anthony Horowitz's Alex Ryder stories and will find a delighted audience of young listeners who like adventure as well as happy endings brought about by hard work and good intentions.” —School Library Journal

“Political intrigue comes to rural New Hampshire in this quiet thriller. Readers will root for this appealing protagonist.” —The Horn Book Magazine

“It is a timely novel of coming-of-age into a society increasingly divided along cultural lines.” —Voices of Youth Advocates

“. . . the political machinations are fun. Best of all, though, are the realistic portrayal of a young teen alone, the unsentimental details of his work, the lyrical sense of the place he loves, and, above all, the meaning of family.” —Booklist

“. . . an outrageous adventure story and a moving tale of self-discovery.” —Grand Rapids Press