Coming Back Alive: The True Story of the Most Harrowing Search and Rescue Mission Ever Attempted on Alaska's High Seas (Paperback) 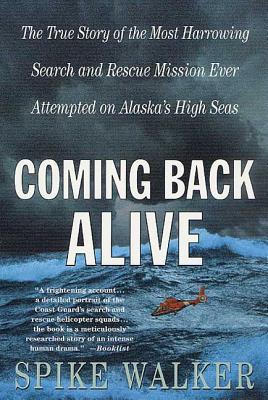 Coming Back Alive: The True Story of the Most Harrowing Search and Rescue Mission Ever Attempted on Alaska's High Seas (Paperback)

When the fishing vessel La Conte sinks suddenly at night in one-hundred-mile-per-hour winds and record ninety-foot seas during a savage storm in January 1998, her five crewmen are left to drift without a life raft in the freezing Alaskan waters and survive as best they can.

One hundred fifty miles away, in Sitka, Alaska, an H-60 Jayhawk helicopter lifts off from America's most remote Coast Guard base in the hopes of tracking down an anonymous Mayday signal. A fisherman's worst nightmare has become a Coast Guard crew's desperate mission. As the crew of the La Conte begin to die one by one, those sworn to watch over them risk everything to pull off the rescue of the century.

Spike Walker's memoir of his years as a deckhand in Alaska, Working on the Edge, was hailed by James A. Michner as "masterful . . . will become the definitive account of this perilous trade, an addition to the literature of the sea." In Coming Back Alive, Walker has crafted his most devastating book to date. Meticulously researched through hundreds of hours of taped interviews with the survivors, this is the true account of the La Conte's final voyage and the relationship between Alaskan fishermen and the search and rescue crews who risk their lives to save them.

Spike Walker spent nine seasons as a crewman aboard some of the most successful crab boats in the Alaskan fleet. While "working on the edge," the crewmen's term for laboring in the brutal outer reaches of the Bering Sea, Spike encountered 110-mph winds, rode out one of the worst storms in Alaska's history, worked nonstop for seventy-four hours without sleep, participated in record catches of king crab, saw ships sink, helped rescue their crews, and had close friends die at sea.  In addition to his crab-fishing experience, Spike Walker has worked in the offshore oilfields of Louisiana and Texas; along the Mississippi River as a certified, commercial deep-sea diver; and in Washington, Oregon, Idaho, and Alaska as a logger. He is the author of several works of nonfiction, including Working on the Edge, Nights of Ice, and Coming Back Alive.

“Walker paints the history, geography, and citizenry of Alaskan fishing towns with great warmth and evocativeness...Don't be surprised if tears of relief flood your eyes after finishing.” —Kirkus Reviews (starred review)

“Junger intrigues you, Greenlaw enlightens you. Walker will scare you half to death...Walker describes seven of the most intense hours I have read about.” —National Fisherman's Journal

“Reminiscent of Sebastian Junger's THE PERFECT STORM and Frederic Stonehouse's THE WRECK OF THE EDMUND FITZGERALD. Highly recommended.” —Library Journal