Little America: The War Within the War for Afghanistan (Paperback) 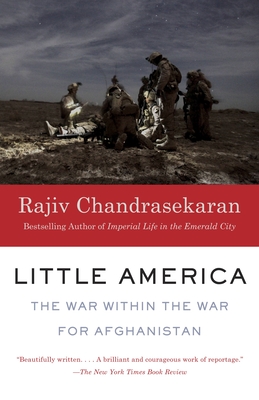 Little America: The War Within the War for Afghanistan (Paperback)

The author of the acclaimed bestseller and National Book Award finalist, Imperial Life in the Emerald City, tells the startling, behind-the-scenes story of the US’s political and military misadventure in Afghanistan. In this meticulously reported and illuminating book, Rajiv Chandrasekaran focuses on southern Afghanistan in the year of President Obama’s surge, and reveals the epic tug of war that occurred between the president and a military that increasingly went its own way. The profound ramifications this political battle had on the region and the world are laid bare through a cast of fascinating characters—disillusioned and inept diplomats, frustrated soldiers, headstrong officers—who played a part in the process of pumping American money and soldiers into Afghan nation-building. What emerges in Little America is a detailed picture of unsavory compromise—warlords who were to be marginalized suddenly embraced, the Karzai family transformed from foe to friend, fighting corruption no longer a top priority—and a venture that became politically, financially, and strategically unsustainable.

Also:
A Washington Post Notable Book
A St. Louis Post-Dispatch Best Book of the Year
Rajiv Chandrasekaran is senior correspondent and associate editor of The Washington Post, where he has worked since 1994. He has been the newspaper's bureau chief in Baghdad, Cairo, and Southeast Asia, and has been covering Afghanistan off and on for a decade. His first book, Imperial Life in the Emerald City, won the Overseas Press Club book award. He lives in Washington, D.C.

“Beautifully written. . . . A brilliant and courageous work of reportage. . . . Rajiv Chandrasekaran has done it again. Like Imperial Life in the Emerald City, Little America is a . . . deeply reported account of how a divided United States government and its dysfunctional bureaucracy have foiled American efforts abroad.”
—The New York Times Book Review

“Fascinating and fresh . . . Chandrasekaran is a superb reporter and graceful writer whose individual vignettes, focused on military and civilian misfires, are on-target and often mortifying.”
—The Wall Street Journal

“Brilliant . . . Only a journalist with Chandrasekaran’s experience and skill could tell this extraordinarily complicated story with such clarity.”
—Newsday

“A scalding and in-depth critique of U.S. policy and performance in Afghanistan.”
—The Star-Ledger

“Chandrasekaran draws vivid sketches of how Karzai and his family and their allies operate as a gang of looters, frustrating every attempt to create an honest government that could confront their Taliban enemy . . . The reader gets a keen sense of the chaos that reigns among the Americans and their allies.”
—The Washington Post

“A thoughtful guide to President Obama’s ‘good war’ [and] a devastating indictment of a dysfunctional war machine . . . Chandrasekaran’s expose is a stark warning to rethink how America uses its power.”
—San Francisco Chronicle

“Chandrasekaran’s apt portrayal of the Afghan perspective and on-the-ground tensions makes the book a must for policy shapers and voters alike.”
—Mother Jones

“A must-read account . . . Little America is the best work yet in addressing our military-diplomatic campaign in Afghanistan and the dysfunction that stymies it.”
—Peter J. Munson, Small Wars Journal

“Searing . . . Solid and timely reporting, crackling prose, and more than a little controversy will make this one of the summer’s hot reads.”
—Publishers Weekly (starred review)

“Clearheaded . . . Well-researched and compelling . . . Chandrasekaran captures the absurdity of a bumbling bureaucracy attempting to reengineer in its own image a society that is half a world away . . . A timely, convincing portrait of an occupation in crisis.”
—Kirkus Reviews

“Drawing on interviews with key participants and three years of first-hand reportage, Chandrasekaran delivers a bracing diagnosis of the problem.”
—Booklist