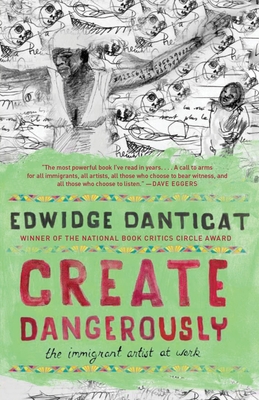 In this deeply personal book, the celebrated Haitian-American writer Edwidge Danticat reflects on art and exile.

Inspired by Albert Camus and adapted from her own lectures for Princeton University’s Toni Morrison Lecture Series, here Danticat tells stories of artists who create despite (or because of) the horrors that drove them from their homelands. Combining memoir and essay, these moving and eloquent pieces examine what it means to be an artist from a country in crisis.
Edwidge Danticat is the author of numerous books, including Claire of the Sea Light, a New York Times notable book; Brother, I'm Dying, a National Book Critics Circle Award winner and National Book Award finalist; Breath, Eyes, Memory, an Oprah Book Club selection; Krik? Krak!, a National Book Award finalist; The Farming of Bones, an American Book Award winner; and The Dew Breaker, a PEN/Faulkner Award finalist and winner of the inaugural Story Prize. The recipient of a MacArthur Fellowship, she has been published in The New Yorker, The New York Times, and elsewhere. She lives in Miami.
“The most powerful book I’ve read in years. . . . A call to arms for all immigrants, all artists, all those who choose to bear witness, and all those who choose to listen.”
—Dave Eggers

“A singular achievement. . . . A tender new book about loss and the unquenchable passion for homeland.”
—The New York Times Book Review

“Danticat writes with a compassionate insight but without a trace of sentimentality. Her prose is energetic, her vision is clear, the tragedies seemingly speaking for themselves.”
—The Miami Herald

“Danticat is a marvelous writer, blending personal anecdotes, history and larger reflections without turning the immigrant writer into a victim, misunderstood by all.”
—The San Francisco Chronicle

“Powerful. . . . [Danticat] acknowledges that the prospect of writing about tragedies and vanished cultures is a daunting one, yet she is not daunted: she accepts that by some accident she exists and has the power to create, and so she does.”
—NewYorker.com's "The Book Bench"