The Lost Battles: Leonardo, Michelangelo and the Artistic Duel That Defined the Renaissance (Paperback) 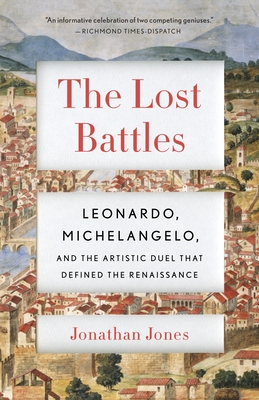 The Lost Battles: Leonardo, Michelangelo and the Artistic Duel That Defined the Renaissance (Paperback)

From one of Britain’s most respected art historians, art critic of The Guardian—the galvanizing story of a sixteenth-century clash of titans, the two greatest minds of the Renaissance, working side by side in the same room in a fierce competition.

In 1504, the informal rivalry between two of the most celebrated artists in Florence became a direct contest. Michelangelo was commissioned to paint a scene from the ancient battle of Cascina on a wall of the Palazzo Vecchio—in the same room where Leonardo da Vinci had already been commissioned to paint a scene from another great Florentine victory, the battle of Anghiari. As the paintings progressed, Michelangelo set out to prove that his work, not Leonardo’s, embodied the future of art--but in fact, the influence of both would become visible in the works of subsequent generations of artists. The Lost Battles is a riveting look at one of history’s most resonant exchanges of ideas and offers a whole new understanding of an age and those at its center.

JONATHAN JONES was born in Wales and graduated from Cambridge University. He is the art critic for The Guardian and a contributor to numerous magazines and newspapers, among them Frieze, RA Magazine, The Independent, the London Evening Standard, and the Los Angeles Times. He appears regularly on the BBC series Private Life of a Masterpiece and has served on the jury for the Turner Prize and the BP Portrait Award. Jones has lectured at the National Gallery, the British Museum, and the Tate Modern. Jones lives in London with his wife and daughter.

A Modern Art Notes Best Book of the Year

“An intricate plot . . . [with] provocative ideas.” —The Wall Street Journal

“Thrilling . . . Written with a novelist’s sense of pace.” —The Independent (London)

“Art lovers, Renaissance junkies, and even travelers will love this book.”—Kirkus Reviews (starred)

“Delightful. . . . Vibrant . . . Sparing neither the two artists, nor Florence, their quirks of character. They are flanked by a vivid parade of supporting characters.”
—The American Scholar

“[Jones] recreates for us the sights, sounds, smells and tastes of 16th century Florence.... [And] compellingly creates the world the two antagonists inhabited, replete with a cast of interesting and colorful supporting characters. . . . That propels us as surely as any well written novel, straight through to the final page.”
—New York Journal of Books

“There is sensuous finesse in Jones's descriptions.”
—The Observer

“The Lost Battles . . . reanimates the giddy heights of the Renaissance through its evocation of a mighty scrap between Leonardo da Vinci and Michelangelo.”
—The Daily Telegraph