The Lost Battles: Leonardo, Michelangelo, and the Artistic Duel That Defined the Renaissance (Hardcover) 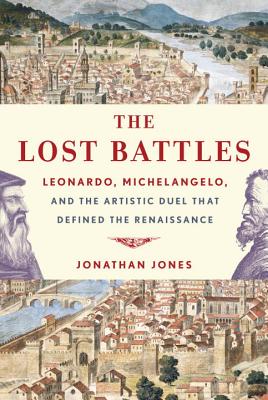 The Lost Battles: Leonardo, Michelangelo, and the Artistic Duel That Defined the Renaissance (Hardcover)

From one of Britain’s most respected and acclaimed art historians, art critic of The Guardian—the galvanizing story of a sixteenth-century clash of titans, the two greatest minds of the Renaissance, working side by side in the same room in a fierce competition: the master Leonardo da Vinci, commissioned by the Florentine Republic to paint a narrative fresco depicting a famous military victory on a wall of the newly built Great Council Hall in the Palazzo Vecchio, and his implacable young rival, the thirty-year-old Michelangelo.

We see Leonardo, having just completed The Last Supper, and being celebrated by all of Florence for his miraculous portrait of the wife of a textile manufacturer. That painting—the Mona Lisa—being called the most lifelike anyone had ever seen yet, more divine than human, was captivating the entire Florentine Republic.

And Michelangelo, completing a commissioned statue of David, the first colossus of the Renaissance, the archetype hero for the Republic epitomizing the triumph of the weak over the strong, helping to reshape the public identity of the city of Florence and conquer its heart.

In The Lost Battles, published in England to great acclaim (“Superb”—The Observer; “Beguilingly written”—The Guardian), Jonathan Jones brilliantly sets the scene of the time—the politics; the world of art and artisans; and the shifting, agitated cultural landscape.

We see Florence, a city freed from the oppressive reach of the Medicis, lurching from one crisis to another, trying to protect its liberty in an Italy descending into chaos, with the new head of the Republic in search of a metaphor that will make clear the glory that is Florence, and seeing in the commissioned paintings the expression of his vision.

Jones reconstructs the paintings that Leonardo and Michelangelo undertook—Leonardo’s Battle of Anghiari, a nightmare seen in the eyes of the warrior (it became the first modern depiction of the disenchantment of war) and Michelangelo’s Battle of Cascina, a call to arms and the first great transfiguration of the erotic into art. Jones writes about the competition; how it unfolded and became the defining moment in the transformation of “craftsman” to “artist”; why the Florentine government began to fall out of love with one artist in favor of the other; and how—and why—in a competition that had no formal prize to clearly resolve the outcome, the battle became one for the hearts and minds of the Florentine Republic, with Michelangelo setting out to prove that his work, not Leonardo’s, embodied the future of art. Finally, we see how the result of the competition went on to shape a generation of narrative paintings, beginning with those of Raphael.

A riveting exploration into one of history’s most resonant exchanges of ideas, a rich, fascinating book that gives us a whole new understanding of an age and those at its center.

JONATHAN JONES was born in Wales and graduated from Cambridge University. He is the art critic for "The Guardian" and a contributor to numerous magazines and newspapers, among them "Frieze," " RA Magazine," "The Independent," the "London Evening Standard," and the" Los Angeles Times." He appears regularly on the BBC series "Private Life of a Masterpiece" and has served on the jury for the Turner Prize and the BP Portrait Award. Jones has lectured at the National Gallery, the British Museum, and the Tate Modern. Jones lives in London with his wife and daughter.

“Perceptively renders the competition between Leonardo da Vinci and Michelangelo . . . in this far-ranging account of their rivalry, Jones evokes also a period, a place and the ideas that shaped both men and their times . . . an informative celebration of two competing geniuses.”
—Richmond Times-Dispatch

“Vibrant . . . sparing neither the two artists, nor Florence, their quirks of character. They are flanked by a vivid parade of supporting characters . . . delightful.”
—The American Scholar

“Everyone loves an artist-rivalry . . . Jones adds recent research and an abundance of storytelling verve to his telling.”
—ArtInfo, “Modern Art Notes’ best books of 2012”

“Fascinating, revelatory, often daring . . . a wonderful guide to this dramatic moment of history. The most rewarding parts of the book are [Jones’s] bold and often persuasive speculations about the ways in which the works of the two contentious heroes speak to each other.”
—The Barnes and Noble Review

“Recreates for us the sights, sounds, smells and tastes of 16th century Florence . . . engaging and informative . . . not just for historians or art aficionados . . . illuminated but not overwhelmed by accurate historical detail that compellingly creates the world the two antagonists inhabited, replete with a cast of interesting and colorful supporting characters . . . [and] that propels us as surely as any well written novel, straight through to the final page.”
—New York Journal of Books

“A portrait of two geniuses continually trying to outdo each other . . . a scholarly work . . . recommended for students of art history as well as the general reader interested in these two Renaissance masters.”
—Library Journal

“Energetic, fast-paced . . . dazzling . . .
Jones’ study of this little discussed competition illustrates the ways that these two great artists competed to assert their imaginations and personalities, giving birth to the Renaissance idea of the artist as godlike creator rather than mere artisan reshaping existing materials.”
—Publishers Weekly

“There is a wealth of information about da Vinci and Michelangelo, and Jones skillfully harvests the best, amusing with his delightful asides and enlightening with his erudite opinions. . . . Art lovers, Renaissance junkies and even travelers will love this book, which brings these two geniuses to vivid life.”
—Kirkus (starred review)