13 Bankers: The Wall Street Takeover and the Next Financial Meltdown (Paperback) 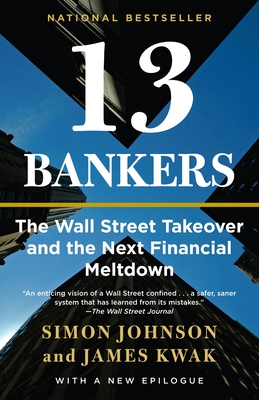 13 Bankers: The Wall Street Takeover and the Next Financial Meltdown (Paperback)


Special Order—Subject to Availability
In spite of its key role in creating the ruinous financial crisis of 2008, the American banking industry has grown bigger, more profitable, and more resistant to regulation than ever. Anchored by six megabanks whose assets amount to more than 60 percent of the country’s gross domestic product, this oligarchy proved it could first hold the global economy hostage and then use its political muscle to fight off meaningful reform. 13 Bankers brilliantly charts the rise to power of the financial sector and forcefully argues that we must break up the big banks if we want to avoid future financial catastrophes.

Updated, with additional analysis of the government’s recent attempt to reform the banking industry, this is a timely and expert account of our troubled political economy.

Simon Johnson is Ronald A. Kurtz Professor of Entrepreneurship at MIT’s Sloan School of Management and a senior fellow of the Peterson Institute for International Economics. He is coauthor, with James Kwak, of The Baseline Scenario, a leading economic blog, described by Paul Krugman as “a must-read” and by Bill Moyers as “one of the most informative news sites in the blogosphere.”

James Kwak is an Associate Professor at the University of Connecticut School of Law. He previously co-founded Guidewire Software.

Visit the authors' blog at baselinescenario.com.

“An enticing vision of a Wall Street confined… a safer, saner system that has learned from its mistakes.”
—The Wall Street Journal

“A provocative prescription for avoiding a repeat of the panic of 2008 that brought the world to the brink of a second Depression.”
—San Francisco Chronicle

“Two of the sharpest critics of the financial establishment. . . . This book puts America’s banking system on trial.”
—Financial Times

“[13 Bankers] holds an explosive idea: Wall Street has hijacked our government. And without a total overhaul, taxpayers will endlessly foot the bill for its sins.”
—Fortune

“The best explanation yet for how the smart guys on Wall Street led us to the brink of collapse. In the process, Johnson and Kwak demystify our financial system, stripping it down to expose the ruthless power grab that lies at its center.”
—Elizabeth Warren, Professor of Law, Harvard Law School; and Chair, TARP Congressional Oversight Panel

“Too many discussions of the Great Recession present it as a purely economic phenomenon. . . . Simon Johnson was the first to point out that this was and is a crisis of political economy. His and James Kwak’s analysis of the unholy inter-twining of Washington and Wall Street—a cross between the gilded age and a banana republic—is essential reading.”
—Niall Ferguson, Professor of History, Harvard University; Professor, Harvard Business School; and author of The Ascent of Money

“A disturbing and painstakingly researched account of how the banks wrenched control of government and society out of our hands—and what we can do to seize it back.”
—Bill Moyers

“Essential reading for anyone who wants to understand what comes next for the world economy. Dangerous and reckless elements of our financial sector have become too powerful and must be reined in. If this problem is not addressed there is serious trouble in all our futures.”
—Nouriel Roubini, Professor of Economics, Leonard N. Stern School of Business, New York University; and Chairman of Roubini Global Economics

“Beautifully written and powerful. Ties the current financial crisis to a cycle of politics as old as the Republic, and to a pathology in our politics that is as profound as any that our Republic has faced. Required reading for the President, and anyone else who cares for this Republic.”
—Lawrence Lessig, Director of the Edmond J. Safra Foundation Center for Ethics, Harvard University

“Johnson and Kwak not only tell us in great detail how the crisis happened and what we must do to avoid another crisis, but they see the deeper political and cultural context that permitted carelessness and excess nearly to break the financial system and plunge us into a depression.”
—Bill Bradley, former U.S. Senator

“A chilling tale of the dangers of concentrated economic, intellectual, and political power. Even if you do not agree with everything the authors have to say, this book makes it clear why ending ‘too big to fail’ and reforming the institutions that perpetuate it are essential for our nation’s future economic prosperity and, more fundamentally, our democratic system.”
—U.S. Senator Jim Bunning

“This book is remarkable in its scope and conclusions. It places changes in financial services and the sector’s regulation over the last twenty years in the context of the last two hundred, and the comparison isn’t favorable. It’s the one book the President (and the Congress) should read.”
—George David, Chairman, United Technologies Corporation

“A timely, informative and important book. You may not agree with all the analysis but the issues so clearly discussed are real, current and vitally important. Financial industry reform must be undertaken soon; inaction, as the authors convincingly argue, would have dangerous consequences. This book explains it all and it’s great reading.”
—Lawrence K. Fish, former Chairman and Chief Executive Officer, Citizens Financial Group

“As 13 Bankers makes lucidly and compellingly clear, the problem with Wall Street leads directly to the core problem of our democracy. American politics now feeds on money, and Wall Street is where the money is. Unless we separate money from politics, we’ll never be safe from another financial meltdown. In fact, we’ll never really be safe. Read this fine book and get to work.”
—Robert B. Reich, Professor of Public Policy, University of California at Berkeley; Former U.S. Secretary of Labor; and author of Aftershock