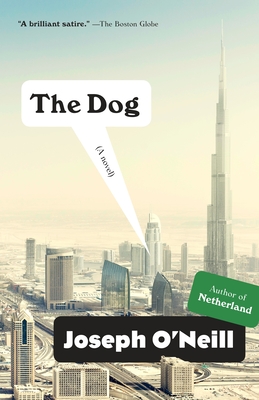 In this extraordinary, both comic and philosophically profound novel, the acclaimed author of Netherland uncovers the hidden contours of a glittering Middle Eastern city—and the quiet dilemmas of modernity. When our unnamed hero, a self-sabotaging and oddly existential lawyer, finds his life in New York falling apart, he seizes an opportunity to flee to Dubai, taking a mysterious job for a fabulously wealthy Lebanese family. As he struggles with his position as the “family officer” of the capricious Batros brothers, he also struggles with the “doghouse,” a condition of culpability in which he feels trapped, even as he composes endless electronic correspondence—both sent and unsent—in an attempt to find a way out.

An unforgettable fable for our globalized times, The Dog is told with Joseph O’Neill’s hallmark eloquence, empathy, and stylistic mastery.

Joseph O’Neill is the author of the novels Netherland (which won the PEN/Faulkner Award for Fiction and the Kerry Group Irish Fiction Award), The Breezes, and This Is the Life, and of a family history, Blood-Dark Track. He lives in New York and teaches at Bard College.

“A brilliant satire.” —The Boston Globe

“A mordantly funny and, surprisingly for these times, deeply moral tale of lost love and economic betrayal.” —John Banville, The Guardian (London)

“Brilliant. . . . A devastating portrait of a man and world stuck in a moral impasse.” —NPR

“A mix of Martin Amis and Thomas Bernhard. . . . With a consummate elegance, The Dog turns in on itself in imitation of the dreadful circling and futility of consciousness itself. . . . Its wit and brio keep us temporarily more alive than we usually allow ourselves to be.” —The New York Times Book Review

“A shimmering portrait of modernity.” —The Guardian (London)

“Our existential hero has a Beckettian soul. . . . O’Neill’s prose is never less than exacting and exalted. . . . O’Neill, more than any other writer in English, inhabits a global world effortlessly.” —The Irish Times

“A humorous meditation on the dialects of attention and distraction in the modern world, O’Neill’s work playfully skewers the global economy of consumption and our abstract notions of responsibility in its perpetuation.” —Library Journal (starred review)

“Pitch-perfect prose. . . . Clever, witty, and profoundly insightful, this is a beautifully crafted narrative about a man undone by a soulless society.” —Publishers Weekly (starred)