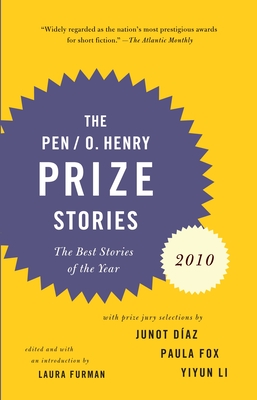 
Special Order—Subject to Availability
A collection of the twenty best contemporary short stories selected by series editor Laura Furman from hundreds of literary magazines, The PEN/O. Henry Prize Stories 2010 brings to life a dazzling array of subjects: a street orphan in Malaysia, a cowboy and his teenage bride, a Russian nanny in Manhattan, a nineteenth-century Nigerian widow, and political prisoners on a Greek island. Also included are essays from the eminent jurors on their favorite stories, observations from the winners on what inspired them, and an extensive resource list of magazines.

Stand By Me
Wendell Berry

The Woman of the House
William Trevor

The End of My Life in New York
Peter Cameron

Into the Gorge
Ron Rash

For author interviews, photos, and more, go to www.ohenryprizestories.com

A portion of the proceeds from this book will go to support the PEN Readers & Writers Literary Outreach Program.

Laura Furman's work has appeared in The New Yorker, Vanity Fair, Ploughshares, The Yale Review, and other magazines. She is the founding editor of the highly regarded American Short Fiction (three-time finalist for the American Magazine Award). A professor of English at the University of Texas at Austin, she teaches in the graduate James A. Michener Center for writers. She lives in Austin.
“Widely regarded as the nation’s most prestigious awards for short fiction.” —The Atlantic Monthly