In FED We Trust: Ben Bernanke's War on the Great Panic (Paperback) 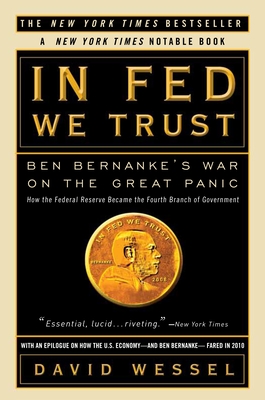 In FED We Trust: Ben Bernanke's War on the Great Panic (Paperback)


Special Order—Subject to Availability
“Whatever it takes”

That was Federal Reserve Chairman Ben Bernanke’s vow as the worst financial panic in more than fifty years gripped the world and he struggled to avoid the once unthinkable: a repeat of the Great Depression. Brilliant but temperamentally cautious, Bernanke researched and wrote about the causes of the Depression during his career as an academic. Then when thrust into a role as one of the most important people in the world, he was compelled to boldness by circumstances he never anticipated.

The president of the United States can respond instantly to a missile attack with America’s military might, but he cannot respond to a financial crisis with real money unless Congress acts. The Fed chairman can. Bernanke did. Under his leadership the Fed spearheaded the biggest government intervention in more than half a century and effectively became the fourth branch of government, with no direct accountability to the nation’s voters.

Believing that the economic catastrophe of the 1930s was largely the fault of a sluggish and wrongheaded Federal Reserve, Bernanke was determined not to repeat that epic mistake. In this penetrating look inside the most powerful economic institution in the world, David Wessel illuminates its opaque and undemocratic inner workings, while revealing how the Bernanke Fed led the desperate effort to prevent the world’s financial engine from grinding to a halt.

In piecing together the fullest, most authoritative, and alarming picture yet of this decisive moment in our nation’s history, In Fed We Trust answers the most critical questions. Among them:

• What did Bernanke and his team at the Fed know–and what took them by surprise? Which of their actions stretched–or even ripped through–the Fed’s legal authority? Which chilling numbers and indicators made them feel they had no choice?

• What were they thinking at pivotal moments during the race to sell Bear Stearns, the unsuccessful quest to save Lehman Brothers, and the virtual nationalization of AIG, Fannie Mae, and Freddie Mac? What were they saying to one another when, as Bernanke put it to Wessel: “We came very close to Depression 2.0”?

• How did the crisis prompt a reappraisal of the once-impregnable reputation of Alan Greenspan?

In Fed We Trust is a breathtaking and singularly perceptive look at a historic episode in American and global economic history.
DAVID WESSEL is the economics editor of The Wall Street Journal and writes the Capital column, a weekly look at the forces shaping living standards around the world. David has shared two Pulitzer Prizes, one for Boston Globe stories in 1983 on the persistence of racism in Boston and the other for stories in The Wall Street Journal in 2002 on corporate wrongdoing. He appears frequently on National Public Radio and is a regular on PBS’s Washington Week.
“...gives a revealing blow-by-blow account of the recent financial crisis”
—David Brooks, The New York Times

“...a tale that’s nothing short of hair-raising..reveals in scary detail how unprepared politicians and regulators truly were...”
—Paul M Barrett, The New York Times Book Review

“Wessel delivers an engrossing account of Bernanke's improvisational responses to the worst financial crisis since the Great Depression.”
—Fortune Magazine

“... so far the most entertaining and most readable book on the financial crisis.”
—Tyler Cowen, marginalrevolution.com

“...persuasively told and richly reported... It will win awards and inspire copycats.”
—BusinessWeek

"David Wessel brings his deep knowledge of the Federal Reserve and U.S. politics and economics to a topic that will be studied by historians for decades to come...No one can understand what happened and what did not happen without reading this book."
–Joseph E. Stiglitz, winner of the Nobel Prize in economics and author of Globalization and its Discontents
For This Book...
Staff Pick