Plato at the Googleplex: Why Philosophy Won't Go Away (Paperback) 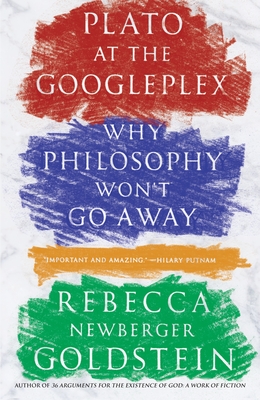 Plato at the Googleplex: Why Philosophy Won't Go Away (Paperback)

Is philosophy obsolete? Are the ancient questions still relevant in the age of cosmology and neuroscience, not to mention crowd-sourcing and cable news? The acclaimed philosopher and novelist Rebecca Newberger Goldstein provides a dazzlingly original plunge into the drama of philosophy, revealing its hidden role in today’s debates on religion, morality, politics, and science.

At the origin of Western philosophy stands Plato, who got about as much wrong as one would expect from a thinker who lived 2,400 years ago. But Plato’s role in shaping philosophy was pivotal. On her way to considering the place of philosophy in our ongoing intellectual life, Goldstein tells a new story of its origin, re-envisioning the extraordinary culture that produced the man who produced philosophy.

But it is primarily the fate of philosophy that concerns her. Is the discipline no more than a way of biding our time until the scientists arrive on the scene? Have they already arrived? Does philosophy itself ever make progress? And if it does, why is so ancient a figure as Plato of any continuing relevance? Plato at the Googleplex is Goldstein’s startling investigation of these conundra. She interweaves her narrative with Plato’s own choice for bringing ideas to life—the dialogue.

Imagine that Plato came to life in the twenty-first century and embarked on a multicity speaking tour. How would he handle the host of a cable news program who denies there can be morality without religion?  How would he mediate a debate between a Freudian psychoanalyst and a tiger mom on how to raise the perfect child? How would he answer a neuroscientist who, about to scan Plato’s brain, argues that science has definitively answered the questions of free will and moral agency? What would Plato make of Google, and of the idea that knowledge can be crowd-sourced rather than reasoned out by experts? With a philosopher’s depth and a novelist’s imagination and wit, Goldstein probes the deepest issues confronting us by allowing us to eavesdrop on Plato as he takes on the modern world.

(With black-and-white photographs throughout.)

Rebecca Newberger Goldstein received her doctorate in philosophy from Princeton University. Her award-winning books include the novels The Mind-Body Problem, Properties of Light, and 36 Arguments for the Existence of God: A Work of Fiction and nonfiction studies of Kurt Gödel and Baruch Spinoza. She has received a MacArthur Foundation Fellowship, has been designated a Humanist of the Year and a Freethought Heroine, and is a fellow of the American Academy of Arts and Sciences. She was awarded the National Humanities Medal in 2015. She lives in Massachusetts.

“Rebecca Newberger Goldstein’s Plato at the Googleplex offers an ambitious apologia for philosophy against its naysayers through a detailed engagement with the ideas of its founding father. It is, quite simply, a tour de force: erudite, intelligent, insightful and beautifully written. . . .  Goldstein’s achievement . . . is truly remarkable, not least because she has dared to make the experience of learning about Plato’s philosophy highly pleasurable.” —Times Higher Education Supplement (UK)

“Highly original. . . . In Plato at the Googleplex, Rebecca Newberger Goldstein set out to showcase, in sometimes startling ways, the continuing relevance of a classic philosopher. But what’s remarkable is that she actually brings off this tour de force with both madcap brilliance and commanding authority.” —Michael Dirda, Washington Post

“I have not done justice to the richness and detail of this invigorating book. The combination of historical scholarship, lively presentation, vernacular dialogue, and intellectual passion make it a unique achievement. Plato may have died over two thousand years ago, but he lives on, vibrantly, in these piquant pages.” —Colin McGinn, Wall Street Journal

“Books like Rebecca Newberger Goldstein’s Plato at the Googleplex are of the rare type that contribute to the popularization of knowledge and create appetite for more. After reading this book you will . . . question your views and knowledge about politics, psychology, science, history, and ethics.” —Liana Giorgi, New York Journal of Books

“Rebecca Newberger Goldstein manages to be so funny and right.” —Stephen Fry

“Consequently Plato at the Googleplex merits comparison to two of the best books of its kind in recent years, Kathryn Schulz’s Being Wrong and Daniel Kahneman’s Thinking, Fast and Slow, but Goldstein’s is, in my opinion, the best of the lot, not because it necessarily has more facts or science, but because it hits more deeply and broadly at the faults of our societal discourse and makes us (well, me at least) feel embarrassed over it.” —David Auerbach, Slate

“Into a weighty discussion of the Platonic world view Goldstein inserts fictional interludes that see Plato, Cromebook in hand, touring the Googleplex, a neuroscience lab and beyond. . . . This thought experiment usefully casts an eye on our turbocharged century. And it shows what survives of this classical titan: an ability to plumb the deep questions we still grapple with, from the nature of knowledge to morality.” —Nature

“A witty, inventive, genre-bending work . . . Goldstein’s philosophical background serves her impressively in this reconsideration of Plato’s work, and her talent as a fiction writer animates her lively cast of characters. . . . [Her] bright, ingenious philosophical romp makes Plato not only relevant to our times, but palpably alive.” —Kirkus Reviews (starred review)

“Plato lives! Brilliantly re-creating Plato’s philosophic dialogues, Goldstein transports the ancient Greek philosopher to the twenty-first-century headquarters of Google, where his probing voice engages three modern hosts in exploring what knowledge means in an age of computerized crowd sourcing. . . . Though Goldstein’s gifts as a novelist animate these dialogues, her scholarly erudition gives them substance, evident in the many citations from Plato’s writings seamlessly embedded in the conversational give-and-take. Goldstein’s scholarship also informs the expository essay that prefaces each dialogue.” —Bryce Christensen, Booklist (starred review)

“Plato at the Googleplex is an important and amazing book. It is important for two reasons: because philosophy is important, and Rebecca Goldstein does a wonderful job of explaining why, and because Plato’s genius remains inspiring, and she also does a wonderful job of explaining why, without losing sight of the fact that Plato lived and thought in a very different time, or losing sight of the fact that he was the beginning, not the end, of philosophy. It is amazing because the book takes great risks—including the risk of including 21st century dialogues about Plato’s philosophy, and thereby risking comparison with the greatest writer of philosophical dialogues that ever lived—and succeeds, in part because she keeps the dialogues as light hearted in tone as they are serious in intent. As she did in Betraying Spinoza, Goldstein beautifully combines the skills of a distinguished novelist with breathtaking philosophical scholarship. I repeat, this book is important and amazing.” —Hilary Putnam, John Cogan University Professor of the Humanities Emeritus, Harvard University


“Plato at the Googleplex is a wonderful book—enjoyably readable, full of stimulating insights and refreshing observations, unintimidatingly erudite, and salted with a gentle wit.  It will reward both readers who are professional philosophers as well as amateurs who are interested in acquiring a deeper understanding of what serious philosophy is all about and why it continues to flourish.” —Harry Frankfurt, author of On Bullshit

“This could be one of the best ever demonstrations of the value and utility of philosophy. Richly insightful, beautifully written, it is at once introduction, exploration and application, revealing the fascination and significance of philosophical ideas and their relevance to life. Like the Plato who figures largely here, Goldstein has both literary and philosophical gifts of the highest order: the combination is superb.” —A.C. Grayling, author of The God Argument

“It would have been easy for a lesser author to drop Plato in a number of modern-day situations, cook up some clever dialog, and land on the conclusion that the philosopher is as comfortable at Google headquarters as he was at the acropolis. Instead, MacArthur Fellow Goldstein imagines Plato and his interlocutors as complex characters. She shows that we’ve brought Plato forward with us into the boardroom and the classroom because of our dependence on the Socratic method for arriving at new knowledge and refining old wisdom. Alongside a few more serious essays, we find Plato debating the distinction between information and knowledge with a Google employee, taking a personality test at New York City’s 92nd Street Y, and debating a ‘hardline’ host on cable news. Verdict: Goldstein is a serious scholar, and her careful citations, footnotes, and background research betray this fact. However, anyone with an interest in philosophy, Plato, or his legacy on Western culture will find this book to be an accessible and enjoyable read.” —Robert C. Robinson, Library Journal

“Novelist and philosopher Goldstein has an imaginative conceit: to bring Plato into the 21st century by having him go on an American book tour. Here, Plato hauls around a Google Chrome computer, generally finds modern technology “wondrous,” and takes the Meyer-Briggs personality inventory. In lieu of Socratic dialogues, he engages in contemporary American ones. . . . These witty contemporary sections constitute about a quarter of the book, while the remainder consists of an in-depth study of Plato’s views and the historical and intellectual context of his times. . . . [Goldstein] proves a clear and engaging writer, and though the academic parts of this book take precedence over the entertaining and accessible contemporary passages, overall, this is both an enjoyable and a serious way to (re)learn Plato’s ideas.” —Publishers Weekly

“‘Every generation could use a Plato,’ said Clancy Martin in The Atlantic. If you doubt it, pick up Rebecca Newberger Goldstein’s ‘ingenious, entertaining, and challenging new book.” In an attempt to challenge the widespread contemporary assumption that science is leading us ever closer to resolving all mysteries, the ever-inventive philosopher-novelist has imagined Plato on tour in America engaging members of today’s chattering class in friendly dialogues that expose the inadequacies of various accepted paths to wisdom. . . . In the end, Plato can be a maddening figure because he never did get around to defining what living the good life would be. Much as he believed that careful thought might help us conduct ourselves more wisely, he remained skeptical even of his own capacity to discern the answer.” —The Week, Book of the Week