Twilight of the Bombs: Recent Challenges, New Dangers, and the Prospects for a World Without Nuclear Weapons (Paperback) 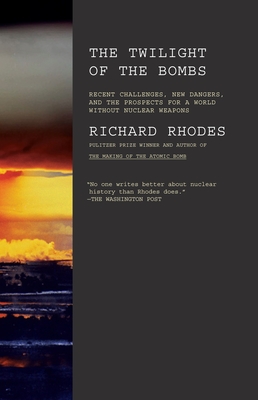 Twilight of the Bombs: Recent Challenges, New Dangers, and the Prospects for a World Without Nuclear Weapons (Paperback)


Special Order—Subject to Availability
The final volume in Richard Rhodes's prizewinning history of nuclear weapons offers the first comprehensive narrative of the challenges faced in the post-Cold War age.

The past twenty years have transformed our relationship with nuclear weapons drastically. With extraordinary depth of knowledge and understanding, Richard Rhodes makes clear how the five original nuclear powers--Russia, Great Britain, France, China, and especially the United States--have struggled with new realities. He reveals the real reasons George W. Bush chose to fight a second war in Iraq, assesses the emerging threat of nuclear terrorism, and offers advice on how our complicated relationships with North Korea and South Asia should evolve. Finally, he imagines what a post-nuclear world might look like, as only he can.
Richard Rhodes is the author or editor of twenty-three books, including The Making of the Atomic Bomb, which won a Pulitzer Prize in Nonfiction, a National Book Award, and a National Book Critics Circle Award, and Dark Sun: The Making of the Hydrogen Bomb, which was a finalist for a Pulitzer Prize in History. He is the recipient of fellowships from the Ford, Guggenheim, MacArthur, and Alfred P. Sloan foundations, among others. He has been a visiting scholar at Harvard, MIT, and Stanford, and a host and correspondent for the public television series Frontline and American Experience. He lectures frequently in the United States and abroad. He lives near Half Moon Bay, California.
“No one writes better about nuclear history than Rhodes does, ably combining a scholar’s attention to detail with a novelist’s devotion to character and pacing.” —The Washington Post

“Rhodes explains both the science and the culture of the nuclear age.  He does so with the wisdom of the historian and the morality of the ages.” —The Boston Globe

“Exciting . . . Cool and evenhanded . . . Rhodes owns this territory, and there’s a lot of it to cover.”--Bloomberg

“[Rhodes] writes with remarkable confidence and clarity about these terrible devices. . . He’s a rare writer who can explain why the short half-life of tritium gas means that we no longer need to worry about suitcase bombs stolen from the old Soviet Union.”--The New York Times Book Review

“A triumph of information-gathering, narrative drive and philosophizing . . . Rhodes’s reporting about averting calamity in the former Soviet Union will resonate months and probably years from now.”--The Denver Post

“Rhodes’s soaring and swooping eagle eye has noticed features in the political landscape of the last 20 years that most of us have overlooked.  Few judgments have the authority and clarity Rhodes can bring to bear as he sorts through the aftermath of the age of the superpowers.”--The Santa Fe New Mexican

“Moving . . . Rhodes makes a good case for the optimistic interpretation of this history—up to a point.”--San Francisco Chronicle

“The Twilight of the Bombs is an apt conclusion to an epic undertaking . . . At each step Rhodes offers fresh perspective on the historical record.”--The Kansas City Star