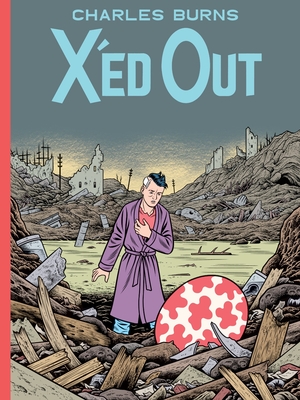 
Backordered
From the creator of Black Hole: the first volume of an epic masterpiece of graphic fiction in brilliant color.

Doug is having a strange night. A weird buzzing noise on the other side of the wall has woken him up, and there, across the room, next to a huge hole torn out of the bricks, sits his beloved cat, Inky. Who died years ago. But who’s nonetheless slinking out through the hole, beckoning Doug to follow.

To say any more would spoil the freaky, Burnsian fun, especially because X’ed Out, unlike Black Hole, has not been previously serialized, and every unnervingly meticulous panel will be more tantalizing than the last . . .

Drawing inspiration from such diverse influences as Hergé and William Burroughs, Charles Burns has given us a dazzling spectral fever-dream—and a comic-book masterpiece.
CHARLES BURNS grew up in Seattle in the 1970s. His work rose to prominence in Art Spiegelman’s Raw magazine in the mid-1980s and took off from there. He has illustrated covers for Time, The New Yorker, and The New York Times Magazine, among many other publications. Burns’s most recent book, Black Hole, received Eisner, Harvey, and Ignatz awards in 2005. He lives in Philadelphia.

“A haunting first chapter in what promises to be a spellbinder…Burns’ control of the story is masterful…it will leave you begging for the rest of the story.” –Publishers Weekly

“Like an apocalyptic hallucination…the visionary artistry of Burns exists beyond the bounds of time and constraints of conventional narrative.” –Kirkus starred review

“Gorgeously ghoulish… it will leave you hungry for more.” –Philadelphia Inquirer

“Nightmarish but oddly innocent… some of his most visually mesmerizing and handsomely presented work to date.” –Santa Cruz Metro

“A fantastic meta-reality where Burns’ spastic yet tightly reined imagination is allowed to feed on itself deliciously.” –AV Club

“Burns’s comics are fluid, smooth and as solidly built as a vintage TV set, but they shudder with the chill of the uncanny.” –New York Times Book Review

“I hope it's the first of many.” –Straight.com

“A surrealistic, often horrifying book… a Tintin homage for grown-ups.” –The Stranger

“Bizarre, haunting, horrific, funny…Burns is skilled at paralyzing readers, and leading us into worlds we never knew existed.” –USA Today

“Burns fans will definitely get their dollar's worth of weirdness…Burns has outdone himself in sheer ambition.” –Los Angeles Times

“Long awaited first chapter in what promises to be a trippy, wildly experimental and typically disquieting epic.” –npr.org

“Its pleasures are many…a very beautiful book.” –The Guardian
“Decadent…His art is as unique as always, and rich in style—as distinctive as any artist…this one throbs with color. Even with the vibrancy, it’s still unsettling.” –Bookgasm

“Cause for celebration…a visual feast as much as a literary one, and it dwells in the mind long after the final pages have turned.” –Culture Mob

“Taps into the archive of gothic and grotesque imagery…What’s dormant inside of Tintin—the abject fear that Hergé rarely acknowledges—X’ed Out brings to life.” –The Comics Journal

“Burns dares you to give him control, stop guessing, and just let him take you where he wants to go with the story. But you have to have the courage to do so…highly recommended.” –Comics Waiting Room

“The plot is something you’ve come to expect from Burns—a premise loaded with darkness and mystery with potential for a great deal of humor…With a creator like Burns, you know whatever you get will be good.” –Broken Frontier.com

“Epic…Burns has given us a dazzling spectral fever-dream—and a comic-book masterpiece.” –The Geek Curmudgeon

“Terrifically creepy…I loved every second of this book.” –Boing Boing

“X’ed Out is easily the best comic I’ve read this year, and we’re living in an age when ambitious, ground-breaking comics are hardly in short supply. Unreservedly recommended.” –FA online

“The art in X’ed Out is immaculate…the world he has crafted is so rich and full of life.” –Comicbuzz.com

“Surreal…Waiting for volume 2 is going to be tough.” –Vice Magazine

“Waiting for volume 2 is going to be tough.” –Vice Magazine

“Quite possibly the beginning of Burns’ finest work.” –MTV Geek

“This is the only comic I’ve ever seen that stabs back at the light that encases it, that radiated something off the page and into my eyesight, that actually made my eyes do something they wouldn’t have otherwise…it’ll go down in history as a masterpiece.” –Comics Alliance

“Challenging and unique…an engaging, engrossing start by one of the most talented comic artists working today.” –October Country blog

“You don’t need any special knowledge to appreciate X’ed Out…You just have to remember what it’s like to be a teenager, to feel alone and lost and stung by love.” –Courier-Journal.com