The Fat Mexican: The Bloody Rise of the Bandidos Motorcycle Club (Paperback) 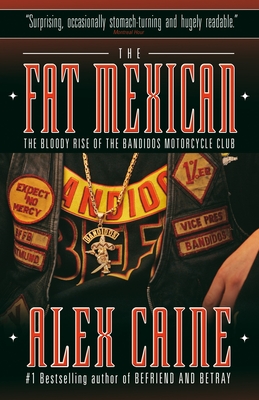 The Fat Mexican: The Bloody Rise of the Bandidos Motorcycle Club (Paperback)


Special Order—Subject to Availability
From the #1 national bestselling author of Befriend and Betray, an intimate exposé of a criminal empire and the massacre that nearly started a global biker war.

Having once infiltrated the Bandidos for three years in a landmark police operation, Alex Caine is uniquely positioned to reveal the untold story of the Hells Angels’ fiercest rivals.

Grounded in the crucible of the little understood Shedden massacre of 2006 and one unlikely prospect’s descent into the biker lifestyle, The Fat Mexican exposes the violent criminal history of the Bandidos motorcycle club, the Hells Angels’ fiercest competition: their violent beginnings, the terror their aggressive expansion caused rivals and innocents alike, and the internal politics and rivalries that drive them to this day.
Alex Caine has retired from his career as a contracted agent, infiltrating criminal and terrorist organizations on behalf of police forces in Canada and abroad. He acts as a consultant in high-level cases and provides the media with background information on biker investigations.
“Chilling and gritty.”
— Publishers Weekly

“From start to finish [Caine’s] story is a compelling one. His powerful account … is a fascinating study.”
— The Vancouver Courier