Thinking in Pictures, Expanded Edition: My Life with Autism (Paperback) 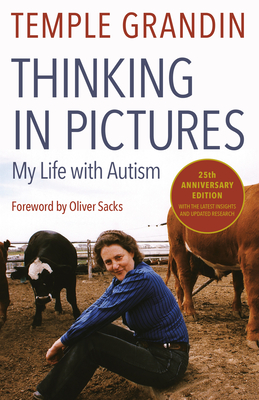 Thinking in Pictures, Expanded Edition: My Life with Autism (Paperback)


On Our Shelves Now at:
The 25th anniversary edition of this seminal work on autism and neurodiversity provides “a uniquely fascinating view” (Deborah Tannen, author of You Just Don’t Understand) of the differences in our brains, and features updated research and insights. With a foreword by Oliver Sacks.

Originally published in 1995 as an unprecedented look at autism, Grandin writes from the dual perspectives of a scientist and an autistic person to give a report from “the country of autism.” Introducing a groundbreaking model which analyzes people based on their patterns of thought, Grandin “charts the differences between her life and the lives of those who think in words” (The Philadelphia Inquirer).

For the new edition, Grandin has written a new afterword addressing recent developments in the study of autism, including new diagnostic criteria, advancements in genetic research, updated tips, insights into working with children and young people with autism, and more.
Temple Grandin is a professor of animal science at Colorado State University and the author of the New York Times bestsellers Animals in Translation, Animals Make Us Human, The Autistic Brain, and Thinking in Pictures, which became an HBO movie starring Claire Danes. Dr. Grandin has been a pioneer in improving the welfare of farm animals as well as an outspoken advocate for the autism community. She resides in Fort Collins, Colorado.
“A uniquely fascinating view not just of autism but of animal—and human—thinking and feeling, [providing] insights that can only be called wisdom.” –Deborah Tannen, author of You Just Don’t Understand

"There are innumerable astounding facets to this remarkable book. . . . Displaying uncanny powers of observation . . . [Temple Grandin] charts the differences between her life and the lives of those who think in words." –The Philadelphia Inquirer

“I hardly know what to say about this remarkable book. . . It provides a way to understand the many kinds of sentience, human and animal, that adorn the earth.” –Elizabeth Marshall Thomas, author of The Hidden Life of Dogs