A Day In The Bleachers (Paperback) 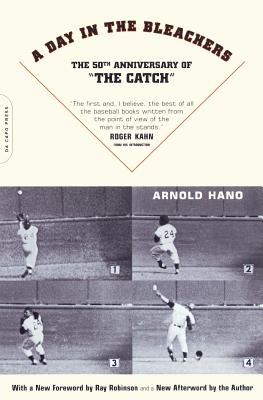 A Day In The Bleachers (Paperback)


In Stock—Click for Locations
From the subway ride to the ballpark, through batting practice and warm-ups, to the game-winning home run, A Day in the Bleachers describes inning by inning the strategies, heroics, and ineluctable rhythms of the opening game of the 1954 World Series. Here are the spectacular exploits of the Indians and Giants, and of a young player named Willie Mays, who made the most-talked-about catch in baseball history.
Arnold Hano is the author of several books on sports and sports figures. Though he remains a New York Giants fan, he now lives in California.

Shelf Unbound, September 2010
“The one title I would recommend to anyone, male or female, love the game or hate it…[It] captures one day, one game, with such loving detail you can almost smell the stale beer on the concrete floor…If I wanted to recruit nonbelievers, I’d hand out A Day in the Bleachers the way Christians hand out New Testaments.”