Improvisation: Its Nature And Practice In Music (Paperback) 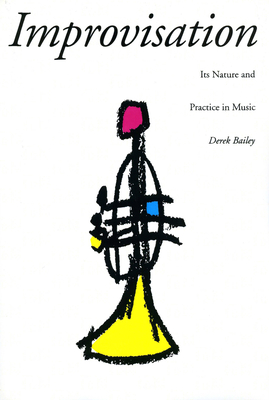 Improvisation: Its Nature And Practice In Music (Paperback)


Not On Our Shelves—Ships in 1-5 Days
Derek Bailey's Improvisation, originally published in 1980, and here updated and extended with new interviews and photographs, is the first book to deal with the nature of improvisation in all its forms--Indian music, flamenco, baroque, organ music, rock, jazz, contemporary, and "free" music. By drawing on conversations with some of today's seminal improvisers--including John Zorn, Jerry Garcia, Steve Howe, Steve Lacy, Lionel Salter, Earle Brown, Paco Peña, Max Roach, Evan Parker, and Ronnie Scott--Bailey offers a clear-eyed view of the breathtaking spectrum of possibilities inherent in improvisational practice, while underpinning its importance as the basis for all music-making.
Guitarist Derek Bailey has performed solo concerts throughout the world, played with most of the musicians associated with free improvisation, and recorded over ninety albums. He lives in London, where he divides his time between solo performances; organizing and playing in Company, an international ensemble of improvising musicians; running his own label, Incus Records; writing; and ad hoc musical activities.