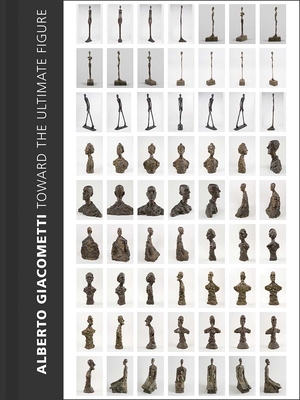 
In Stock—Click for Locations
A comprehensive survey of the work of the legendary Swiss artist, this book illustrates and examines more than 100 of his sculptures, paintings, drawings, and prints

This lavishly illustrated retrospective traces the early and midcareer development of the preeminent Swiss artist Alberto Giacometti (1901–1966), examining the emergence of his distinct figural style through works including a series of walking men, elongated standing women, and numerous busts. Rare paintings and drawings from his formative period show the significance of landscape in Giacometti’s work, while also revealing the influence of the postimpressionist painters that surrounded his father, the artist Giovanni Giacometti. Other areas of inquiry on which Alberto Giacometti casts new light are his studio practice—amply illustrated with photographs—his obsessive focus on depicting the human head, his collaborations with poets and writers, and his development of the walking man sculpture, thanks to numerous drawings, many of which have never been shown. Original essays by modern art and Giacometti specialists shed new light on era-defining sculptural masterpieces, including the Walking Man, the Nose, and the Chariot, or on key aspects of his work, such as the significance of surrealism, his drawing practice, or the question of space.
Emilie Bouvard is director of collections and scientific program at the Fondation Giacometti, Paris.