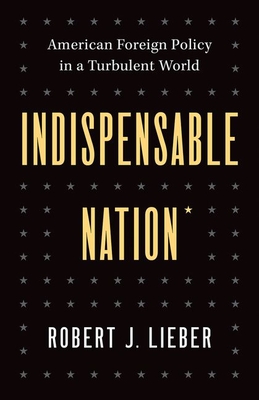 
On Our Shelves Now at:
A clear-eyed analysis of the role the United States should play in the world as it exists today

The United States remains “the indispensable nation.” In this book, the distinguished international relations theorist and foreign policy specialist Robert Lieber argues that in a world full of revisionist powers, America’s role is more important than ever. No other country is capable of playing that role. America remains the essential pillar of the postwar liberal order. It is a center of both political and financial stability, and it promotes important values that the revisionist powers do not. Not beholden to any particular theory, this is a clear-eyed analysis of the role the United States should play in the world as it exists today.
Robert J. Lieber is emeritus professor of government and international affairs at Georgetown University and has written or edited eighteen books on U.S. foreign policy. He has also advised presidential campaigns, the State Department, and the drafters of U.S. National Intelligence Estimates.
“Lieber provides a magisterial account of American global leadership, from the Cold War to the covid crisis, and the challenges posed by ambitious adversaries, China, Russia and Iran.”—Russell A. Berman, author of Fiction Sets You Free

“What is America’s global role in the 21st century? With his usual common sense and cool logic, Robert Lieber cuts to the core and describes a path that is both realistic and principled.”—Elliott Abrams, former Deputy National Security Advisor

“The world cannot do without a strong and engaged America, but the United States is losing its way. Drawing on his long career as one of the world’s most prominent scholars of international affairs, Robert Lieber brings wisdom and prudence to a case for the return of American leadership.”—Tom Nichols, author of The Death of Expertise

“In recent decades, the emotional impetus behind American foreign policy has vacillated between overoptimism combined with complacency and pessimism combined with resignation. In Indispensable Nation, Robert Lieber makes a strong case for a reasoned and sustainable approach to international challenges and opportunities. As the world witnesses the return of large-scale war in Europe, this book should be read widely and debated.”—H. R. McMaster, author of Battlegrounds: The Fight to Defend the Free World