The Story of the Country House: A History of Places and People (Hardcover) 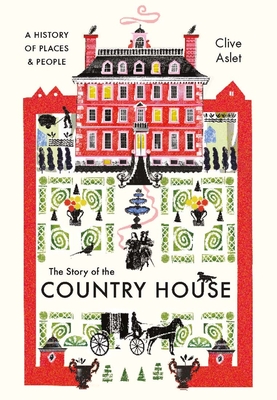 The Story of the Country House: A History of Places and People (Hardcover)


In Stock—Click for Locations
The fascinating story of the evolution of the country house in Britain, from its Roman precursors to the present

“An eclectic scholarly account, tracing the evolution of the country house from the hunting lodges of the Middle Ages to the modern villas of today. . . . Mr. Aslet is an elegant writer with a wry sense of humor.”—Moira Hodgson, Wall Street Journal

“[Aslet] doesn’t just tell us who built what, and for whom, and in what style, but about the prevailing economic circumstances and fashions of each period.”—Simon Heffer, Daily Telegraph

The Story of the Country House is an authoritative and vivid account of the British country house, exploring how they have evolved with the changing political and economic landscape. Clive Aslet reveals the captivating stories behind individual houses, their architects, and occupants, and paints a vivid picture of the wider context in which the country house in Britain flourished and subsequently fell into decline before enjoying a renaissance in the twenty-first century. The genesis, style, and purpose of architectural masterpieces such as Hardwick Hall, Hatfield House, and Chatsworth are explored, alongside the numerous country houses lost to war and economic decline. We also meet a cavalcade of characters, owners with all their dynastic obsessions and diverse sources of wealth, and architects such as Inigo Jones, Sir John Vanbrugh, Robert Adam, Sir John Soane and A.W.N. Pugin, who dazzled or in some cases outraged their contemporaries. The Story of the Country House takes a fresh look at this enduringly popular building type, exploring why it continues to hold such fascination for us today.
Clive Aslet is a writer, commentator, historian, editor, and academic. He has written around twenty books on architecture and history and was editor of Country Life magazine from 1993 to 2006.
“Some of those details are jawdropping. . . . What Aslet does best is provide a crisp, chronological survey of how the country house evolved architecturally from early Tudor times through to Lutyens in the early 20th century and to Quinlan Terry and the like today.”—Richard Morrison The Times

“An eclectic scholarly account, tracing the evolution of the country house from the hunting lodges of the Middle Ages to the modern villas of today. . . . Mr. Aslet is an elegant writer with a wry sense of humor.”—Moira Hodgson, Wall Street Journal

“The Story of the Country House is in many respects what we have been waiting for...His book doesn’t just tell us who built what, and for whom, and in what style, but about the prevailing economic circumstances and fashions of each period.”—Simon Heffer, The Daily Telegraph

“A wonderful survey of the architectural splendours of the British country house. Beginning with medieval manor houses, Aslet unfolds a history which moves through the centuries...The tradition he celebrates so richly in this book still thrives.”—Nick Rennison, Daily Mail

“Aslet, a former editor of the quietly influential magazine Country Life, provides a knowledgeable and briskly witty backdrop stretching back to the Romans and their well-built villas.”—Miranda Seymour, Financial Times

“The 223 pages can be read in one gripping sitting and create a desire to rush off and visit the many houses mentioned. . . . Mr Aslet’s nimble book is the perfect companion guide.”—Jeremy Musson, Country Life

“Written in a wonderfully accessible style...Examples abound, lively and amusing, but always subservient to the narrative. It’s a perfect primer for anyone new to the subject, but even aficionados will enjoy it for pleasure of reading a magisterial overview of Britain’s quintessential cultural form.”—Historic House Magazine

“Leaving no stone unturned, this fascinating book allows readers to acquaint themselves with the architects of these houses, and their many interesting occupants.”—This England

“Clive Aslet’s The Story of the Country House is rammed with scholarly and academic wisdom but simple enough to be a guide for complete novices. . . . Aslet has a gift for setting the scene, rooting each era in geopolitical context.”—Nicholas Coleridge, Air Mail

"The Story of the Country House is a witty, well-researched and absorbing retelling of the story of the British country house. Clive Aslet brings to life a fascinating cast of characters—the builders, their families, their servants and their architects, all living to nurture the beau idéal of the country house—and charts their changing fortunes and hidden histories."—Julian Fellowes

"Clive Aslet is the Capo dei Capi of British country houses—few people alive today understand them better, or better know where the bodies are buried. His decades as an architectural historian and editor, his authoritative eye and matchless prose, combine to make him the ideal person to explore this important topic."—Nicholas Coleridge

"Aslet has spent a lifetime exploring and investigating the architectural and social history of the country house and in this concise, but magisterial sweep he provides an elegant and perceptive introduction to the subject from the medieval to the present day. It is a must for the library of every country house enthusiast or anyone indeed anyone trying to understand this rich and dynamic subject in which so many threads of British culture and history meet. Aslet peppers his discerning fluent, scholarly overview with well chosen details and contemporary quotations which evoke country house culture in each period."—Jeremy Musson

"What an excellent book, an eloquent introduction to an everlasting British institution."—Simon Jenkins