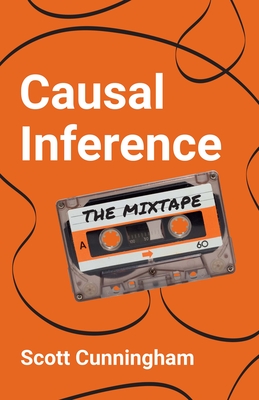 
Not On Our Shelves—Ships in 1-5 Days
An accessible, contemporary introduction to the methods for determining cause and effect in the social sciences

“Causation versus correlation has been the basis of arguments—economic and otherwise—since the beginning of time. Causal Inference: The Mixtape uses legit real-world examples that I found genuinely thought-provoking. It’s rare that a book prompts readers to expand their outlook; this one did for me.”—Marvin Young (Young MC)

Causal inference encompasses the tools that allow social scientists to determine what causes what. In a messy world, causal inference is what helps establish the causes and effects of the actions being studied—for example, the impact (or lack thereof) of increases in the minimum wage on employment, the effects of early childhood education on incarceration later in life, or the influence on economic growth of introducing malaria nets in developing regions. Scott Cunningham introduces students and practitioners to the methods necessary to arrive at meaningful answers to the questions of causation, using a range of modeling techniques and coding instructions for both the R and the Stata programming languages.
Scott Cunningham is professor of economics at Baylor University. He is also coeditor of The Oxford Handbook of the Economics of Prostitution.