The Emperor's New Road: China and the Project of the Century (Hardcover) 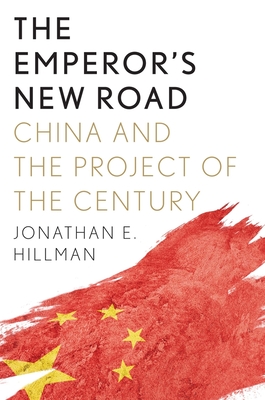 The Emperor's New Road: China and the Project of the Century (Hardcover)

"For all the hype and hand-wringing over how the [Belt and Road] could usher in the Chinese century, Hillman’s engaging mix of high-level analysis and fieldwork in more than a dozen countries paints a much more nuanced picture."—Keith Johnson, Foreign Policy

China’s Belt and Road Initiative is the world’s most ambitious and misunderstood geoeconomic vision. To carry out President Xi Jinping’s flagship foreign-policy effort, China promises to spend over one trillion dollars for new ports, railways, fiber-optic cables, power plants, and other connections. The plan touches more than one hundred and thirty countries and has expanded into the Arctic, cyberspace, and even outer space. Beijing says that it is promoting global development, but Washington warns that it is charting a path to global dominance.

Taking readers on a journey to China’s projects in Asia, Europe, and Africa, Jonathan E. Hillman reveals how this grand vision is unfolding. As China pushes beyond its borders and deep into dangerous territory, it is repeating the mistakes of the great powers that came before it, Hillman argues. If China succeeds, it will remake the world and place itself at the center of everything. But Xi may be overreaching: all roads do not yet lead to Beijing.
Jonathan E. Hillman, a senior fellow at the Center for Strategic and International Studies (CSIS), is director of the Reconnecting Asia Project, one of the most extensive databases tracking China’s Belt and Road Initiative.
“[T]he book points up a central, unresolved paradox of China in the world...Hillman’s book is at its most beguiling when he recounts his traveller’s tales. At one point, he finds himself in Aktau, a port on the Kazakhstan side of the Caspian Sea. This is a crucial link for the BRI, a place from which cargo and people cross the huge inland sea on ships that connect Asia with Europe.”—James Kynge, Financial Times

“Hillman’s book is a rare and insightful one alerting the world to the dangers of allowing itself to be reshaped, by an autocratic China, armed with the latest mass surveillance technologies, in its image and for its benefit. The Emperor’s New Road: China and the Project of the Century deserves to be read by policymakers everywhere.”—Uday Balakrishnan, Biblio

"For all the hype and hand-wringing over how the [Belt and Road] could usher in the Chinese century, Hillman’s engaging mix of high-level analysis and fieldwork in more than a dozen countries paints a much more nuanced picture."—Keith Johnson, Foreign Policy

“A good introduction to its chosen topic.”—Tyler Cowen, Marginal Revolution

“Hillman's book provides a nuanced view of world affairs. For policymakers, it shows the risks as well as the pluses of imperial outreach and, at the opposite extreme, head­ in-the-sands unilateralism. . . . It could be a valuable supplement to conventional textbooks on international studies. But it will be a rewarding eye-opener for anyone interested in the rise of China and its consequences for the United States and all nations.”—Walter Clemens, New York Journal of Books

“Hillman lays out the terrain of the New Silk Road, which takes in over 130 countries and pledges upwards up a trillion dollars in investment, as well as the differing perspectives of it around the world. In the process he corrects some important misconceptions and argues that Beijing is positioning itself at the center of the new world order to replace Washington.”—Alec Ash, The Wire

"A first-rate blend of analysis and journalistic reporting from the front lines of economic statecraft."—Michael J. Mazarr, War on the Rocks

“For all the hype and hand-wringing over how the BR! could usher in the Chinese century, Hillman's engaging mix of high-level analysis and fieldwork in more than a dozen countries paints a much more nuanced picture.”—Keith Johnson, Foreign Policy

“This valuable book focuses on the many forms of resistance that China is encountering as its influence expands.”—Andrew J. Nathan, Foreign Affairs

“A timely look at one of Xi Jinping’s most ambitious projects.”—Nayan Chanda, Global Asia


"Hillman takes us on a wonderfully engaging journey along China’s Belt and Road. He weaves together fresh insights from on-the-ground interviews across the Eurasian continent with fascinating historical references to provide the definitive account of this grand-scale initiative that challenges our understanding of traditional geopolitical and strategic boundaries."—Elizabeth C. Economy, author of The Third Revolution

"The Emperor’s New Road is a small book that shows the industriousness of a big one: a complex blend of travel, history, politics, and economics about the greatest long-running geopolitical story of our time, China’s new Silk Road. It shows the big picture as well as the vital, ground-level details.”—Robert D. Kaplan, author of The Return of Marco Polo’s World and The Revenge of Geography

"China’s Belt and Road is reshaping the world’s economic and strategic landscape, and in this sweeping and thought-provoking tour, Jonathan Hillman reveals the gaps between Beijing’s grand rhetoric and ground reality. Required reading for the C-Suite and the Situation Room.”—Stephen J. Hadley, former U.S. National Security Advisor

“An outstanding book by one of the most interesting and original thinkers about the rise of China, the Belt and Road Initiative, and what both mean for the rest of the world. Filled with insights into the changing world of the twenty-first century—essential reading.”—Peter Frankopan, author of the international bestseller The Silk Roads: A New History of the World

"Jonathan Hillman offers an insightful contribution that helps cut through the noise on one of the most important projects of China’s foreign policy.”—Graham Allison, Harvard Kennedy School of Government