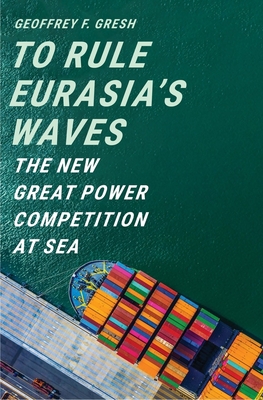 “A detailed account of the growing importance of the Chinese, Indian, and Russian navies and how this competition is playing out in waters stretching from the Indo-Pacific area to the Arctic and the Mediterranean.”—Lawrence D. Freedman, Foreign Affairs

“It is a must-read for scholars, policymakers, and anyone interested in the great power competition.”—Yongzheng Parker Li, Pacific Affairs

Eurasia’s emerging powers—India, China, and Russia—have increasingly embraced their maritime geographies as they have expanded and strengthened their economies, military capabilities, and global influence. Maritime Eurasia, a region that facilitates international commerce and contains some of the world’s most strategic maritime chokepoints, has already caused a shift in the global political economy and challenged the dominance of the Atlantic world and the United States. Climate change is set to further affect global politics.

With meticulous and comprehensive field research, Geoffrey Gresh considers how the melting of the Arctic ice cap will create new shipping lanes and exacerbate a contest for the control of Arctic natural resources. He explores as well the strategic maritime shifts under way from Europe to the Indian Ocean and Pacific Asia. The race for great power status and the earth’s changing landscape, Gresh shows, are rapidly transforming Eurasia and thus creating a new world order.
Geoffrey F. Gresh, professor of international relations at the National Defense University, Washington, D.C., is the author of Gulf Security and the U.S. Military: Regime Survival and the Politics of Basing.
“Since the ‘Great Game’ emerged in the nineteenth century, Eurasia has long been seen as the focal point for geopolitical competition, and Gresh’s study breaks new ground in its focus on the naval dimension. . . . This intriguing study will be of interest to naval experts as well as scholars with a research interest in international relations in Eurasian, Chinese, Indian, or Russian foreign policy.”—Elizabeth Wishnick, Slavic Review

“It is a must-read for scholars, policymakers, and anyone interested in the great power competition.”—Yongzheng Parker Li, Pacific Affairs

“Inspired by the grand tradition of geo-strategists such as Alfred Thayer Mahan and Nicholas J. Spykman, Geoffrey Gresh’s To Rule Eurasia’s Waves wanders the seas in search of signs of competition between China, Russia and India. . . . Gresh traveled widely for his study, allowing him to enliven the narrative of great-power jousting with first-hand anecdotes from outside China’s first overseas garrison in Djibouti or the infamous Chinese port in Hambantota, Sri Lanka.”—John Delury, Global Asia

“[T]his is a well-researched, useful and thought-provoking book. The methodology used to examine the growing great power competition at sea is excellent.”—Mark Bailey, Australian Naval Institute

“[To Rule Eurasia’s Waves] repeatedly shows the importance of Eurasia’s narrow, strategic maritime choke points, and how this may increase the possibility of future conflicts in a globalised world. Thus, the major importance of the book is its focus on considering the Eurasian landmass as a whole and linking it to the maritime potential of various political actors in a vast and highly complicated region. With so much of the world’s trade reliant on maritime routes—along with the multidimensional nature of seapower and its impact on international relations and politics—it is certainly an important research topic.”—Mihai Murariu, Europolity

“The sheer volume of detail Gresh offers is incredible. From the European littorals awash in Chinese cash . . . to China’s domestic maritime industry . . . the author brings to life the convoluted web of corporations and state-owned enterprises forming the vanguard of the Belt and Road Initiative and the Maritime Silk Road. Even for readers well versed in these endeavors, there is something to learn in To Rule Eurasia’s Waves.”— Lieutenant Commander Blake Herzinger, Naval Proceedings

“To Rule Eurasia’s Waves is well written, clear, and filled with factual detail and strategic insights. Perhaps most importantly, it addresses an enduring issue for both scholars and policy makers not only in the U.S. but across the world.”—Peter Dombrowski, U.S. Naval War College

“This is a superb look at the emerging competition between international maritime peers for sea control and power projection—which will be central to national destiny for the U.S., China, India, and Russia. This unfolding ‘great game’ at sea will deeply influence the geopolitics of the twenty-first century.”—Admiral James Stavridis, U.S. Navy (retired), 16th Supreme Allied Commander at NATO and author of Sea Power: The History and Geopolitics of the World’s Oceans

“A comprehensive, fresh, and penetrating analysis of a changing Eurasia, using its surrounding seas to project economic and strategic influence for the first time in its history.”—John Curtis Perry, author of Singapore: Unlikely Power