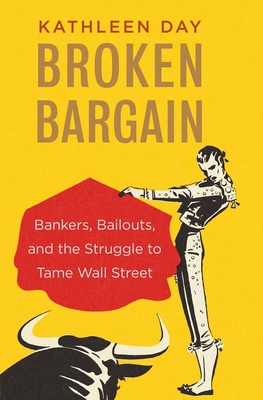 In the 1930s, battered and humbled by the Great Depression, the U.S. financial sector struck a grand bargain with the federal government. Bankers gained a safety net in exchange for certain curbs on their freedom: transparency rules, record-keeping and antifraud measures, and fiduciary responsibilities. Despite subsequent periodic changes in these regulations, the underlying bargain played a major role in preserving the stability of the financial markets as well as the larger economy. By the free-market era of the 1980s and 90s, however, Wall Street argued that rules embodied in New Deal–era regulations to protect consumers and ultimately taxpayers were no longer needed—and government agreed.

This engaging history documents the country’s financial crises, focusing on those of the 1920s, the 1980s, and the 2000s, and reveals how the two more recent crises arose from the neglect of this fundamental bargain, and how taxpayers have been left with the bill.
Kathleen Day worked for thirty years as a business journalist with the Washington Post, Los Angeles Times, and USA Today before joining the Johns Hopkins Carey Business School as a professor of financial crises in 2013. She lives in Washington, DC.
“The collapse of the savings and loan industry in the 1980s, the Enron debacle, Charlie Keating’s junk bonds, the Great Recession: All, by Day’s well-defended account, are of a piece, showing once again, as if proof were needed, that history teaches only that humans do not learn from history. A fluent if dispiriting study of an economic system that forgives those at the top so long as those at the bottom remain willing to foot the bill.”—Kirkus Reviews

“An engaging analysis . . . Day clearly presents complex financial arrangements to explain what led to the crises and how government and bankers responded. The section on the S & L crisis is excellent.”—CHOICE magazine

“Day has written a sweeping account of financial calamities. She shows how often we’ve been wracked by crises, and how quickly we forget why, setting up the next one. Buckle in.”—Mark Zandi, Moody’s Analytics

"Kathleen Day provides a panoramic and insightful analysis of financial booms and crashes that have shaped our nation’s history. She demonstrates that loose credit and weak regulation have played key roles in promoting every speculative boom since the 1920s. Her book is required reading for everyone who wants to understand how to prevent the next financial crisis."—Arthur E. Wilmarth, Jr., George Washington University Law School

"An essential narrative of the regulatory cycles that predate financial crises, Broken Bargain offers an important lesson in the dangers of amnesia as Washington once again embarks on deregulation, repeating the mistakes of the past."—Sheila Bair, founding Chair of the Systemic Risk Council and former Chair of the FDIC