Welcome to the Poisoned Chalice: The Destruction of Greece and the Future of Europe (Hardcover) 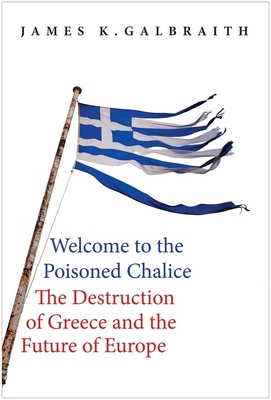 Welcome to the Poisoned Chalice: The Destruction of Greece and the Future of Europe (Hardcover)


Not On Our Shelves—Ships in 1-5 Days
(This book cannot be returned.)
A world-renowned economist offers cogent and powerful reflections on one of the great avoidable economic catastrophes of the modern era

The economic crisis in Greece is a potential international disaster and one of the most extraordinary monetary and political dramas of our time. The financial woes of this relatively small European nation threaten the long-term viability of the Euro while exposing the flaws in the ideal of continental unity. "Solutions" proposed by Europe’s combined leadership have sparked a war of prideful words and stubborn one-upmanship, and they are certain to fail, according to renowned economist James K. Galbraith, because they are designed for failure. It is this hypocrisy that prompted former finance minister Yanis Varoufakis, when Galbraith arrived in Athens as an adviser, to greet him with the words “Welcome to the poisoned chalice.”

In this fascinating, insightful, and thought-provoking collection of essays—which includes letters and private memos to both American and Greek officials, as well as other previously unpublished material—Galbraith examines the crisis, its causes, its course, and its meaning, as well as the viability of the austerity program imposed on the Greek citizenry. It is a trenchant, deeply felt commentary on what the author calls “economic policy as moral abomination,” and an eye-opening analysis of a contemporary Greek tragedy much greater than the tiny economy of the nation itself.
James K. Galbraith holds the Lloyd M. Bentsen, Jr., Chair in Government/Business Relations at the LBJ School of Public Affairs, University of Texas at Austin. He is the author of eight books and hundreds of articles for both scholarly and general-interest journals.
"This book . . . written in the heat of the moment, serves as a running commentary on the [Greek financial] crisis. . . . Gives Syriza’s take on a story often seen in the Anglophone press through the eyes of Brussels officials. . . . Always a critic of economic orthodoxy, Galbraith is even more savage in his indictment of the political calculations that shaped the creditor’s position."—Delphine Strauss, Financial Times

"An eloquent and informed chronicle of the Greek debt crisis for current readers and future historians."—Publishers Weekly

"How did Europe fall into this trap of low growth, high inequality, and political discontent? Galbraith offers the most succinct explanation of why the system has benefited Germany at the expense of weaker economies."—Andrew Moravcsik, Foreign Affairs

"To have had Jamie Galbraith as my adviser in the Ministry of Finance, during our epic struggle against wholesale economic irrationality at the height of its vengefulness, was a blessing. To be able to count on Jamie Galbraith as a close friend borders on outrageously good fortune."—Yanis Varoufakis

"One can only agree with James Galbraith when he observes that 'The economic crisis in Greece is one of the great economic and political dramas of our time . . . and a test case for the long-term viability of the Euro.' I greatly admire Professor Galbraith not only for his contributions to economic theory but also for his ability to free himself from the shackles of ideology and deal with reality as it effectively is. I fully concur with his conclusions."—Giuseppe Guarino, Former Finance Minister of Italy

"To read James K. Galbraith is to think afresh, and at the same time to reconcile oneself with reality. Welcome to the Poisoned Chalice is a true story: there was hemlock in the cup. It is a comfort, at least, to know the truth."—Michel Rocard, former Prime Minister of France

"In Welcome to the Poisoned Chalice, James Galbraith gives us an extraordinary inside account of Greece’s courageous and ultimately ill-fated challenge to a European power structure whose policies have left much of the continent in economic tatters. It is a tale of practical idealism coming face to face with brute political and financial power—a saga that is likely to be the opening chapter in the unfolding battle for Europe’s future."—Phil Angelides, Chairman, U.S Financial Crisis Inquiry Commission (2009-2011)

"The imposition of austerity economics in Greece, following on the 2008-09 global financial collapse and Great Recession, has been an unmitigated human disaster. Welcome to the Poisoned Chalice is the very best account available as to how powerful policymakers, and the economists they listen to, got everything wrong. Galbraith is a masterful writer; his story is accessible and compelling."—Robert Pollin, Distinguished Professor of Economics, University of Massachusetts-Amherst