The Edge of Reason: A Rational Skeptic in an Irrational World (Hardcover) 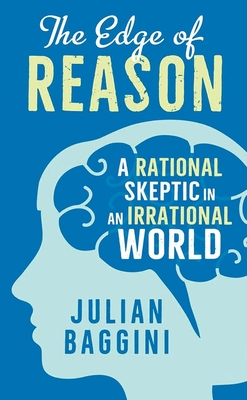 The Edge of Reason: A Rational Skeptic in an Irrational World (Hardcover)


Special Order—Subject to Availability
An urgent defense of reason, the essential method for resolving—or even discussing—divisive issues

Reason, long held as the highest human achievement, is under siege. According to Aristotle, the capacity for reason sets us apart from other animals, yet today it has ceased to be a universally admired faculty. Rationality and reason have become political, disputed concepts, subject to easy dismissal.

Julian Baggini argues eloquently that we must recover our reason and reassess its proper place, neither too highly exalted nor completely maligned. Rationality does not require a sterile, scientistic worldview, it simply involves the application of critical thinking wherever thinking is needed. Addressing such major areas of debate as religion, science, politics, psychology, and economics, the author calls for commitment to the notion of a “community of reason,” where disagreements are settled by debate and discussion, not brute force or political power. Baggini's insightful book celebrates the power of reason, our best hope—indeed our only hope—for dealing with the intractable quagmires of our time.
Julian Baggini is a philosopher, cofounder of The Philosopher’s Magazine, and author, coauthor, or editor of more than twenty books. He lives in Bristol, UK.
"Baggini, who has one foot in the academic world of philosophy, another in the world of journalism, expertly straddles the abstract and the practical. . . . Blending lucidity and passion, Baggini shows how much richer and more varied reason is than often supposed. Ultimately, he reminds us, the outcome of our reasonings has to depend not on objective truth but on what “we feel compelled to accept as objective."—Jane O’Grady, Financial Times
"It provides an extremely readable introduction to many issues related to reasoning."—Choice
Won the 2017 Choice Award for Outstanding Academic Title
"Julian Baggini has written a masterpiece, and what a timely masterpiece it is. The toxic gloating of 'gut feelings,' hateful politics and heart-over-head attacks on good sense urgently need an antidote. Baggini has risen to the occasion. In this compelling book, he is fair-minded, incisive and bold; he never ducks the hard questions, but faces them head-on. And, luckily for the reader, he has the breadth of knowledge to pull this off, the wit to make it fun, and the clarity to keep us turning the page."—Patricia S. Churchland, author of Touching a Nerve: Our Brains, Our Selves