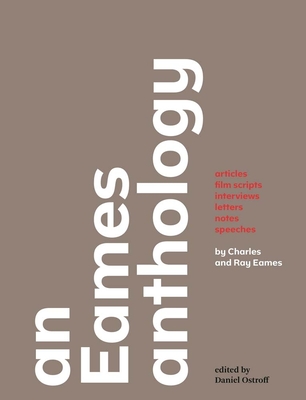 An Eames Anthology collects for the first time the writings of the esteemed American architects and designers Charles and Ray Eames, illuminating their marriage and professional partnership of fifty years. More than 120 primary-source documents and 200 illustrations highlight iconic projects such as the Case Study Houses and the molded plywood chair, as well as their work for major corporations as both designers (Herman Miller, Vitra) and consultants (IBM, Polaroid). Previously unpublished materials appear alongside published writings by and about the Eameses and their work, lending new insight into their creative process. Correspondence with such luminaries as Richard Neutra and Eero Saarinen provides a personal glimpse into the advance of modernity in mid-century America.
Charles Eames (1907–1978) and Ray Eames (1912–1988) are celebrated for their groundbreaking work in furniture, architecture, exhibitions, graphic design, toys, and film.

Daniel Ostroff is the author of Modern Classic, Eames + Valastro, and Collecting Eames. He was consulting curator for Eames Words and curator of Collecting Eames: The JF Chen Collection, both for The Getty Museum's Pacific Standard Time Consortium. He has consulted for The Eames Office, The Museum of California Design, Herman Miller, LACMA and SFMoMA, and others. Ostroff also produces feature films, television, and documentaries.

"The lesson of the extraordinary Eames Anthology, at 400 pages full to the brim with creative and novel selections by Daniel Ostroff, is the Eames’ genius for imagining degrees of design interference and degrees of responsibility that had never been conceived either before or after. One is struck, while reading the Anthology, at the sheer depth of their moral commitments."—LA Review of Books

"A standard resource to which scholars will turn for many years to come."—John Stuart Gordon, Yale University Art Gallery