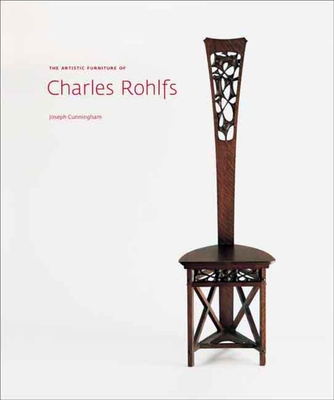 Charles Rohlfs (1853–1936) ranked among the most innovative furniture makers at the turn of the twentieth century. Praised by the international press and exhibited throughout the United States and Europe, his beautiful works grew out of an interesting mix of styles that included Arts and Crafts, Art Nouveau, and proto-modernism. This book presents the first major study of this important American designer and craftsman, drawing upon new photographs and fresh sources of information.

Alongside traditional historical approaches, the book presents detailed formal, structural, and stylistic analyses of Rohlfs’s well-known masterpieces from major museums, together with lesser-known objects in public and private collections.  Topics include discovering the contribution of Rohlfs’s wife—mystery novelist Anna Katharine Green—to his designs; the far-ranging sources of his idiosyncratic motifs; his influence on Gustav Stickley’s designs; his commissioned interiors; his efforts at self-promotion and marketing; and his attempts to define a conceptual framework for his artistic endeavor. Handsomely designed and illustrated, the book also features a complete set of unpublished period illustrations of over seventy works.

"Charles Rohlfs . . . was active as [a] furniture designer for a relatively short time, but his influence has been quite extensive. This erudite and comprehensive biographical catalog explains how."—Maine Antique Digest
— Maine Antique Digest