For All the World to See: Visual Culture and the Struggle for Civil Rights (Hardcover) 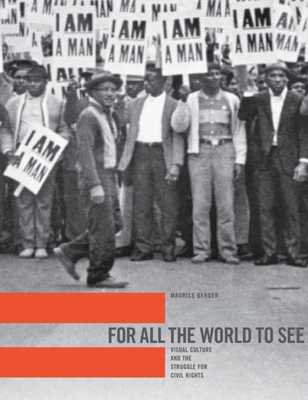 For All the World to See: Visual Culture and the Struggle for Civil Rights (Hardcover)

A stunning visual history of the civil rights movement in America

In 1955, shortly after Emmett Till was murdered by white supremacists in Mississippi, his grieving mother distributed to the press a gruesome photograph of his mutilated corpse. Asked why she would do this, she explained that by witnessing with their own eyes the brutality of segregation and racism, Americans would be more likely to support the cause of racial justice. “Let the world see what I’ve seen,” was her reply. The publication of the photograph inspired a generation of activists to join the civil rights movement.

Despite this extraordinary episode, the story of visual culture’s role in the modern civil rights movement is rarely included in its history. This is the first comprehensive examination of the ways images mattered in the struggle, and it investigates a broad range of media including photography, television, film, magazines, newspapers, and advertising.

These images were ever present and diverse: the startling footage of southern white aggression and black suffering that appeared night after night on television news programs; the photographs of black achievers and martyrs in Negro periodicals; the humble snapshot, no less powerful in its ability to edify and motivate. In each case, the war against racism was waged through pictures—millions of points of light, millions of potent weapons that forever changed a nation. Through vivid storytelling and incisive analysis, this powerful book allows us to see and understand the crucial role that visual culture played in forever changing a nation.

Maurice Berger is Senior Research Scholar at the Center for Art, Design, and Visual Culture, University of Maryland, Baltimore County, and Senior Fellow at the Vera List Center for Art and Politics of The New School. He is the author of the critically acclaimed White Lies: Race and the Myths of Whiteness, which was named as a finalist for the 2000 Horace Mann Bond Book Award.

“Even ‘unforgettable’ images such as those contained in this project can be forgotten if they are not part of a public and highly visible record. With this tremendously important book, Maurice Berger has ensured that these powerful, affirming, and harrowing images will remain central to the story of this country's furious and joyful struggle for civil rights.”—Henry Louis Gates, Jr., Harvard University

"Stunning both visually and interpretively, this marvelous book is by turns chilling and inspiring, poignant and gritty.  The images it chooses and juxtaposes will introduce young people to worlds of struggle too little recalled and remind us all of the stakes involved in images of race and freedom."—David Roediger, author of How Race Survived U.S. History: From Settlement and Slavery to the Obama Phenomenon
— David Roediger

“In 1955, the photograph of Emmett Till’s mutilated body was for many African-Americans the visual equivalent of a knock-out punch. . . . That single image played a powerful role in building the civil rights movement, we learn in Maurice Berger’s For All the World to See.”—Boston Globe

“For All the World to See. . . reminds us though text and images just how powerfully photography affected the course of a major social movement that changed the history and the fabric of American life, all for the better.”