In Defense of Sovereignty: Protecting the Oneida Nation's Inherent Right to Self-Determination (Hardcover) 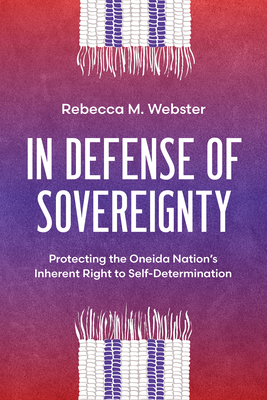 In Defense of Sovereignty: Protecting the Oneida Nation's Inherent Right to Self-Determination (Hardcover)


Coming Soon—Pre-Order Now
In Defense of Sovereignty recounts the history of the Oneida Nation and its struggles for self-determination. Since the nation’s removal from New York in the 1820s to what would become the state of Wisconsin, it has been engaged in legal conflicts with US actors to retain its sovereignty and its lands. Legal scholar and former Oneida Nation senior staff attorney Rebecca M. Webster traces this history, including the nation’s treaties with the US but focusing especially on its relationship with the village of Hobart, Wisconsin. Since 2003 there have been six disputes that have led to litigation between the local government and the nation. Central to these disputes are the local government’s attempts to regulate the nation and relegate its government to the position of a common landowner, subject to municipal authority.

As in so many conflicts between Indigenous nations and local municipalities, the media narrative about the Oneida Nation’s battle for sovereignty has been dominated by the local government’s standpoint. In Defense of Sovereignty offers another perspective, that of a nation citizen directly involved in the litigation, augmented by contributions from historians, attorneys, and a retired nation employee. It makes an important contribution to public debates about the inherent right of Indigenous nations to continue to exist and exercise self-governance within their territories without being challenged at every turn.
Rebecca M. Webster, an assistant professor in the American Indian studies department at the University of Minnesota Duluth, is a former senior staff attorney for the Oneida Nation. She is the coeditor of Tribal Administration and Governance Handbook, and her articles can be found in American Indian Quarterly, Planning Theory and Practice, Wisconsin Lawyer, Ethnohistory, and the Journal of American Indian Education.
“This valuable book lays out the features of a legal and political strategy to defend a reservation boundaries case. This material is very readable, even thrilling in places where tribal citizens detail their ongoing, real-world struggles with the Village of Hobart. Successful and compelling.”—Matthew L. M. Fletcher, author of Ghost Road: Anishinaabe Responses to Indian-Hating

“A compelling account of the Oneida Nation’s struggle to retain its sovereignty and its reservation lands. This book describes jurisdictional battles that Indian nations in the United States are continually confronted with, and provides helpful instruction on how these nations can work on a government-to-government basis with their neighbors. It offers hope that Indian nations can preserve their cultural and political integrity and continue to prosper and thrive.”—C. Kent McNeil, author of Flawed Precedent: The “St. Catherine’s” Case and Aboriginal Title