Animals under the Swastika (Hardcover) 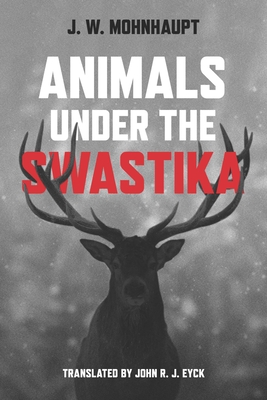 Animals under the Swastika (Hardcover)


Not On Our Shelves—Ships in 1-5 Days
Never before or since have animals played as significant a role in German history as they did during the Third Reich. Ultimately, the ways in which Nazis conceptualized and used animals reveals much about their racist and bigoted attitudes toward other humans. Drawing from diaries, journals, school textbooks, and printed propaganda, Mohnhaupt focuses each chapter on a different facet of Nazism by way of a specific animal species.

J.W. Mohnhaupt is a journalist based in Magdeburg and Vienna and the author of Der Zoo der Anderen (The Zookeeper’s War). His work has appeared in Der Spiegel, Die Zeit, and PM History, among others.

John R. J. Eyck is an independent translator and scholar based in New York City.
“The book triumphs with its detailed combination of pleasant-to-read stories and well-researched historical facts. . . . [Mohnhaupt] highlights a large, up-to-now overlooked facet of how deeply Nazi ideology penetrated all areas of society.”—FALTER

“By zooming in on man and his relationship to animals, the book avoids belittlement; it in no way moves the atrocities of the Nazis to the background. Just the opposite: with each chapter, the reader becomes a witness. . . . Rarely has a book on animals been more political, rarely has racial fanaticism in such detail been more noticeable.”—Die Zeit

“Informative and descriptive and never lurid. . . . Worth the read. With every animal he mentions—be it a louse, dog, cat, pig, horse, or deer—Mohnhaupt makes the Nazi ideology clear.”—Spektrum der Wissenschaft