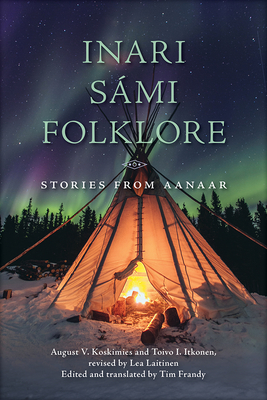 
Not On Our Shelves—Ships in 1-5 Days
A rich multivoiced anthology of folktales, legends, joik songs, proverbs, riddles, and other verbal art, this is the most comprehensive collection of Sámi oral tradition available in English to date. Collected by August V. Koskimies and Toivo I. Itkonen in the 1880s from nearly two dozen storytellers from the arctic Aanaar (Inari) region of northeast Finland, the material reveals a complex web of social relations that existed both inside and far beyond the community.

First published in 1918 only in the Aanaar Sámi language and in Finnish, this anthology is now available in a centennial English-language edition for a global readership. Translator Tim Frandy has added biographies of the storytellers, maps and period photos, annotations, and a glossary. In headnotes that contextualize the stories, he explains such underlying themes as Aanaar conflicts with neighboring Sámi and Finnish communities, the collapse of the wild reindeer populations less than a century before, and the pre-Christian past in Aanaar. He introduces us to the bawdy humor of Antti Kitti, the didacticism of Iisakki Mannermaa, and the feminist leanings of Juho Petteri Lusmaniemi, emphasizing that folktales and proverbs are rooted in the experiences of individuals who are links in a living tradition.
Tim Frandy is an assistant professor in the Department of Folk Studies and Anthropology at Western Kentucky University. A member of the Sámi American community, he has been active in Indigenous cultural revitalization movements in North America and Scandinavia.
"Frandy has made visible a goldmine of folklore that has been invisible to outsiders, and he introduces it in a deeply informed, nuanced context." —Krister Stoor, Umeå University

"A glimpse of a wide range of oral genres from a little-known Sámi group during the nineteenth century that will fascinate people interested in the folklore of the Sámi, Scandinavian studies, and the study of Indigenous communities." —John Lindow, University of California, Berkeley