The Pox Lover: An Activist's Decade in New York and Paris (Living Out: Gay and Lesbian Autobiog) (Hardcover) 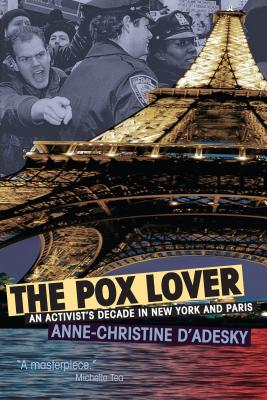 The Pox Lover: An Activist's Decade in New York and Paris (Living Out: Gay and Lesbian Autobiog) (Hardcover)


Not On Our Shelves—Ships in 1-5 Days
The Pox Lover is a personal history of the turbulent 1990s in New York City and Paris by a pioneering American AIDS journalist, lesbian activist, and daughter of French-Haitian elites. In an account that is by turns searing, hectic, and funny, Anne-christine d'Adesky remembers "the poxed generation" of AIDS—their lives, their battles, and their determination to find love and make art in the heartbreaking years before lifesaving protease drugs arrived.

D'Adesky takes us through a fast-changing East Village: squatter protests and civil disobedience lead to all-night drag and art-dance parties, the fun-loving Lesbian Avengers organize dyke marches, and the protest group ACT UP stages public funerals. Traveling as a journalist to Paris, an insomniac d'Adesky trolls the Seine, encountering waves of exiles fleeing violence in the Balkans, Haiti, and Rwanda. As the last of the French Nazis stand trial and the new National Front rises in the polls, d'Adesky digs into her aristocratic family's roots in Vichy France and colonial Haiti. This is a testament with a message for every generation: grab at life and love, connect with others, fight for justice, keep despair at bay, and remember.

Anne-christine d'Adesky is an investigative journalist and documentary filmmaker who reported on the global AIDS epidemic for New York Native, OUT, The Nation, and The Village Voice. She received the first Award of Courage from amfAR, the Foundation for AIDS Research. She was an early member of ACT UP and cofounder of the Lesbian Avengers. Her books include Beyond Shock: Charting the Landscape of Sexual Violence in Post-Quake Haiti, Moving Mountains: The Race to Treat Global AIDS, and a novel set in post-Duvalier Haiti, Under the Bone.
"Reminiscent of the luscious lesbian literature of the Parisian past, but propelled into the era of AIDS, ACT UP, and the Lesbian Avengers. D'Adesky's memoir also reveals her family's role in French colonialism, raising compelling questions about privilege, survival, homophobia, and dislocation." —Sarah Schulman, author of The Cosmopolitans

"A haunting contribution to the record of the AIDS era." —Laura Flanders, author of Bushwomen: Tales of a Cynical Species


"A necessary book. We need such a chronicle." —Felice Picano, author of Like People in History

"In a voice both powerful and cool, The Pox Lover takes on a sprawling personal history, deeply aware throughout that it is the politics of anyone's day—and how we respond to it—that shapes a life. Never far from the mad joy of writing, loving, and being alive, even as it investigates our horribly mundane capacity for horror, this book is a masterpiece." —Michelle Tea, author of Black Wave