Reason after Its Eclipse: On Late Critical Theory (George L. Mosse Series in the History of European Culture, Sexuality, and Ideas) (Hardcover) 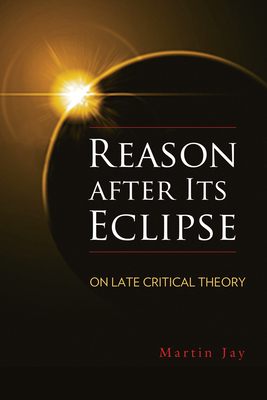 Reason after Its Eclipse: On Late Critical Theory (George L. Mosse Series in the History of European Culture, Sexuality, and Ideas) (Hardcover)


Not On Our Shelves—Ships in 1-5 Days
Martin Jay tackles a question as old as Plato and still pressing today: what is reason, and what roles does and should it have in human endeavor? Applying the tools of intellectual history, he examines the overlapping, but not fully compatible, meanings that have accrued to the term "reason" over two millennia, homing in on moments of crisis, critique, and defense of reason.

After surveying Western ideas of reason from the ancient Greeks through Kant, Hegel, and Marx, Jay engages at length with the ways leading theorists of the Frankfurt School—Horkheimer, Marcuse, Adorno, and most extensively Habermas—sought to salvage a viable concept of reason after its apparent eclipse. They despaired, in particular, over the decay in the modern world of reason into mere instrumental rationality. When reason becomes a technical tool of calculation separated from the values and norms central to daily life, then choices become grounded not in careful thought but in emotion and will—a mode of thinking embraced by fascist movements in the twentieth century.

Is there a more robust idea of reason that can be defended as at once a philosophical concept, a ground of critique, and a norm for human emancipation? Jay explores at length the ommunicative rationality advocated by Habermas and considers the range of arguments, both pro and con, that have greeted his work.
Martin Jay is the Sidney Hellman Ehrman Professor Emeritus of History at the University of California, Berkeley. His many books include The Dialectical Imagination, Marxism and Totality, and The Virtues of Mendacity.
"Martin Jay is one of the most respected intellectual historians now working, and any book by him is an important event. His subject here could hardly be bigger: the idea of reason in Western thought over two millennia."—Michael Rosen, Harvard University

"A magisterial rethinking of the fate of reason, particularly in German philosophy from Kant to Habermas."—Anson Rabinbach, Princeton University


"A magisterial rethinking of the fate of reason, particularly in German philosophy from Kant to Habermas." —Anson Rabinbach, Princeton University