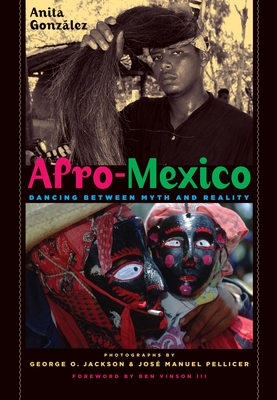 While Africans and their descendants have lived in Mexico for centuries, many Afro-Mexicans do not consider themselves to be either black or African. For almost a century, Mexico has promoted an ideal of its citizens as having a combination of indigenous and European ancestry. This obscures the presence of African, Asian, and other populations that have contributed to the growth of the nation. However, performance studies—of dance, music, and theatrical events—reveal the influence of African people and their cultural productions on Mexican society.

In this work, Anita González articulates African ethnicity and artistry within the broader panorama of Mexican culture by featuring dance events that are performed either by Afro-Mexicans or by other ethnic Mexican groups about Afro-Mexicans. She illustrates how dance reflects upon social histories and relationships and documents how residents of some sectors of Mexico construct their histories through performance. Festival dances and, sometimes, professional staged dances point to a continuing negotiation among Native American, Spanish, African, and other ethnic identities within the evolving nation of Mexico. These performances embody the mobile histories of ethnic encounters because each dance includes a spectrum of characters based upon local situations and historical memories.

Anita González is Associate Professor and Associate Chair of Theatre Arts at the State University of New York at New Paltz. She is the author of Jarocho's Soul: Cultural Identity and Afro-Mexican Dance, and she has published essays in Modern Drama, Journal of Dramatic Theory and Criticism, Community and Performance Reader, and Dance Research Journal.