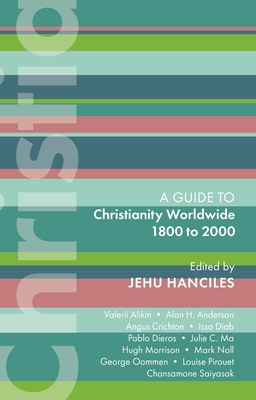 In 1800 most Christians lived in Europe or North America, but by 2000 they came from Africa, Asia, Latin America and Oceania.

ISG 47: Christianity Worldwide 1800-2000 brings together voices from around the world to explore how Christianity grew and developed in the nineteenth and twentieth centuries. Writers and theologians from each region of the globe lay out the history of Christianity between 1800 and 2000 in their part of the world, showing how repeatedly it was local believers who drove the changes in those centuries, both in sharing faith and adapting it to their particular culture - a Chinese Bible translator, Liberian prophet or Korean Bible woman is as significant as a British missionary or Italian pope. These histories include not only the wide range of European-founded denominations, but also regional innovations across the globe and particularly Pentecostalism, to give a comprehensive overview of Christianity's development worldwide from the 1800s through to the end of the twentieth century. Tracing connections and themes across continents, ISG 47: Christianity Worldwide 1800-2000 is ideal for students of theology and history learning about the development of Christianity around the globe, especially in the global south. Part of the SPCK International Study Guide series, it will leave you with a thorough understanding of how Christianity has changed and grown across the world over the last two centuries.
Jehu J. Hanciles is the D.W. Ruth Brooks Professor of World Christianity and director of the World Christianity Program at Candler School of Theology at Emory University in Atlanta. Originally from Sierra Leone, he is author of Euthanasia of a Mission: African Church Autonomy in a Colonial Context, Beyond Christendom: Globalization, African Migration and the Transformation of the West and Migration and the Making of Global Christianity. He is also editor of The Twentieth Century: Traditions in a Global Context.