In Light of Rome: Early Photography in the Capital of the Art World, 1842-1871 (Hardcover) 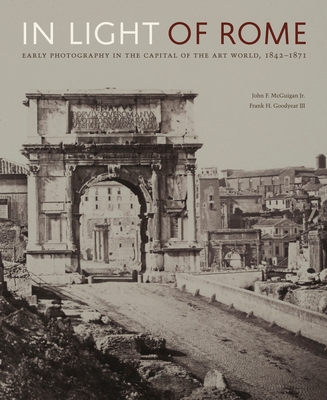 In Light of Rome: Early Photography in the Capital of the Art World, 1842-1871 (Hardcover)

This comprehensive study of Rome's contribution to the early history of photography traces the medium's rise from a fledgling science to a dynamic form of artistic expression that forever changed the way we perceive the Eternal City.

The authors examine the diverse transnational group of photographers who thrived in the cosmopolitan art center of Rome--and the pivotal role they played in the refinement and technical development of the nascent medium in the nineteenth century. The book ranges from the earliest pioneers--the French daguerreotypist Joseph-Philibert Girault de Prangey and the Welsh calotypist Calvert Richard Jones--to the work of the Roman School of Photography and its successors, among them James Anderson and Robert Macpherson of Britain; Fr d ric Flach ron, Firmin Eug ne Le Dien, and Gustave Le Gray of France; and Giacomo Caneva, Adriano de Bonis, and Pietro Dovizielli of Italy.

Lavishly illustrated with 112 plates, many never before published, by nearly fifty practitioners, this volume expands our understanding of the place of Rome in early photography. An exhibition of the same title, to open at the Bowdoin College Museum of Art in December 2022, accompanies this study.

John F. McGuigan Jr. is an independent art historian and the coauthor of James E. Freeman, 1808-1884: An American Painter in Italy; John Gadsby Chapman: America's First Artist-Etcher; and At the Foot of the Pyramid: 300 Years of the Cemetery for Foreigners in Rome. Frank H. Goodyear III is codirector of the Bowdoin College Museum of Art. His most recent publications include Marcia Resnick: As It Is or Could Be; At First Light: Two Centuries of Maine Artists, Their Homes and Studios; and Winslow Homer and the Camera: Photography and the Art of Painting.