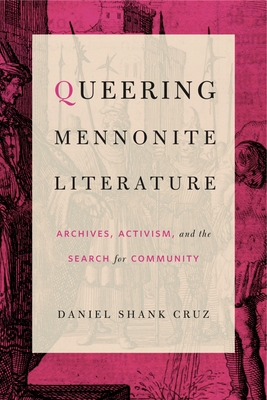 Though the terms "queer" and "Mennonite" rarely come into theoretical or cultural contact, over the last several decades writers and scholars in the United States and Canada have built a body of queer Mennonite literature that shifts these identities into conversation. In this volume, Daniel Shank Cruz brings this growing genre into a critical focus, bridging the gaps between queer theory, literary criticism, and Mennonite literature.

Cruz focuses his analysis on recent Mennonite-authored literary texts that espouse queer theoretical principles, including Christina Penner's Widows of Hamilton House, Wes Funk's Wes Side Story, and Sofia Samatar's Tender. These works argue for the existence of a "queer Mennonite" identity on the basis of shared values: a commitment to social justice, a rejection of binaries, the importance of creative approaches to conflict resolution, and the practice of mutual aid, especially in resisting oppression. Through his analysis, Cruz encourages those engaging with both Mennonite and queer literary criticism to explore the opportunity for conversation and overlap between the two fields.

By arguing for engagement between these two identities and highlighting the aspects of Mennonitism that are inherently "queer," Cruz gives much-needed attention to an emerging subfield of Mennonite literature. This volume makes a new and important intervention into the fields of queer theory, literary studies, Mennonite studies, and religious studies.