Do This: Liturgy as Performance (Hardcover) 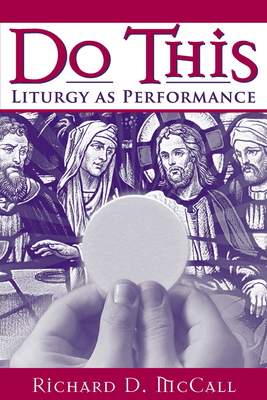 Do This: Liturgy as Performance (Hardcover)

Dramatic elements have always been apparent in the historic Christian liturgy. Because the liturgy is a structured action and not merely a verbal narrative, it has historically been both illuminated by and confused with other types of performance, such as theatre and drama. This confusion has been compounded by the fact that much analysis of liturgy has focused on the linguistic and theological aspects of the event and not on its elements of performance.

In Do This: Liturgy as Performance, Richard D. McCall presents a systematic approach to the liturgy as event rather than text, using tools made available by contemporary performance theory. McCall follows the rise of dramatic interpretation of the early Christian liturgy from its beginnings through such elements as costumes, interpretative text, and gesture. He then examines the development of performance theory, focusing on the work of Victor Turner and Richard Schechner, and asks if it can be applied to the liturgy. Three views of liturgical theology, especially that of Aiden Kavanagh's, which holds that the liturgy as enacted is liturgy properly presented, set the stage for McCall to construct a definition of liturgy as a mode of performance. In chapter 4, McCall brings Aristotle's categories in the Poetics to bear on liturgical action. In the final chapter he analyzes an actual liturgical enactment: the celebration of the Mass at Rome in the early eighth century according to the Gregorian Sacramentary and the actions described in Ordo Romanus I.

Do This: Liturgy as Performance bridges the work of performance scholarship and liturgical studies in a groundbreaking, interdisciplinary way. The book will interest seminarians and liturgical scholars in a variety of fields, including theology and the arts, early Christian liturgy, Church history, and liturgical theology.

Richard D. McCall was associate professor of liturgy and church music at the Episcopal Divinity School. He is currently retired.