Reverence for the Relations of Life: Re-Imagining Pragmatism Via Josiah Royce's Interactions with Peirce, James, and Dewey (Hardcover) 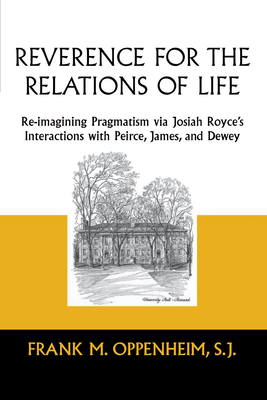 Reverence for the Relations of Life: Re-Imagining Pragmatism Via Josiah Royce's Interactions with Peirce, James, and Dewey (Hardcover)

Josiah Royce and William James lived in Cambridge, Massachusetts, on Irving Street, just two doors apart, and Charles Peirce grew up only blocks away. John Dewey was born and educated in nearby Vermont. These four great thinkers shared more than geographic space; they engaged in a series of formative philosophical discussions. By tracing the interactions of Royce (1855-1916) with James, Peirce, and Dewey, Oppenheim "re-imagines pragmatism" in a way that highlights the late Royce's role as mediator and favors the "seed-plant" image of O. W. Holmes, Jr., over the corridor image of Papini.

Josiah Royce emphasized that communities of all sizes--ranging from families to towns--needed "reverence for the relations of life" not only to thrive but to survive. This theme permeates the dialectic of Royce's interactions with Peirce, James, and Dewey. Oppenheim analyzes the agreement and disagreement of these thinkers on the method and content of philosophy, skepticism and intelligibility, and nominalism and intentionality, as he uncovers their varied stances toward transcendent Reality.

Oppenheim repudiates Ralph Barton Perry's tactic of using Royce as a foil to display James positively, by offering a richer portrait of Royce. Oppenheim calls attention to Royce's "doctrine of two levels" and its effects on the distinction of human and super-human, by showing the contrast of Royce's "third attitude of will" against two primarily self-centered attitudes of will, and by examining the roles of Spirit, Community, and semiotic process in Royce's late thought.

Frank M. Oppenheim, who is widely regarded as an expert on Josiah Royce, brings more than 40 years of study to bear on this magnum opus. Reverence for the Relations of Life will be essential reading for those interested in American philosophy and theology.