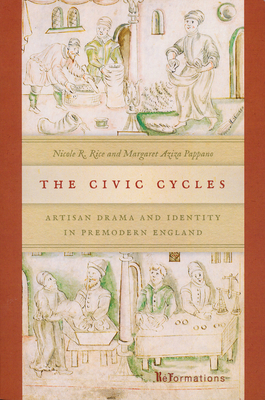 The civic religious drama of late medieval England--financed, produced, and performed by craftspeople--offers one of the earliest forms of written literature by a non-elite group in Europe. In this innovative study, Nicole R. Rice and Margaret Aziza Pappano trace an artisanal perspective on medieval and early modern civic relations, analyzing selected plays from the cities of York and Chester individually and from a comparative perspective, in dialogue with civic records. Positing a complex view of relations among merchants, established artisans, wage laborers, and women, the two authors show how artisans used the cycle plays to not only represent but also perform their interests, suggesting that the plays were the major means by which the artisans participated in civic polity. In addition to examining selected plays in the context of artisanal social and economic practices, Rice and Pappano also address relations between performance and historical transformation, considering how these plays, staged for nearly two centuries, responded to changes in historical conditions. In particular, they pay attention to how the pressures of Reformist governments influenced the meaning and performance of the civic religious drama in both towns. Ultimately, the authors provide a new perspective on how artisans can be viewed as social actors and agents in England in the fifteenth and sixteenth centuries.

The Civic Cycles is an outstanding take on the urban dramas of medieval York and Chester, complementing previous historicist scholarship on these plays while expanding the political frame of reference. This volume is poised to become a major book in early English drama studies, a text that coordinates and assimilates all of the revisionary historicist work on the cycles from the previous two decades even as it takes that historicism to the next level of complexity. --Robert Barrett, Jr., University of Illinois at Urbana-Champaign

Nicole R. Rice and Margaret Aziza Pappano present the most powerful argument to date about the ways that cycle plays allowed artisans to perform their changing socioeconomic identities in English towns over several centuries. Their impressive and detailed knowledge of the craft cultures of both towns supports a fascinating new comparison between York's and Chester's versions of biblical history. --Kathleen Ashley, University of Southern Maine

Suitable for undergraduates and advanced scholars alike, this lucidly written and solidly documented analysis of the Chester and York cycles offers a welcome return to questions of urban commerce and social identity in civic religious drama. It convincingly shows the central place of artisanal aspirations and concerns and the complex and, at times, combative relationship of the artisan companies with their mercantile superiors, on the one hand, and the underclass of unskilled laborers and urban poor, on the other. Rice and Pappano offer a fresh reappraisal of the decline and cessation of the cycles, taking an original approach to economic factors (e.g., new poor laws) intersecting with political and religious opposition. The book is an important contribution to early English drama studies. --Paul Whitfield White, Purdue University