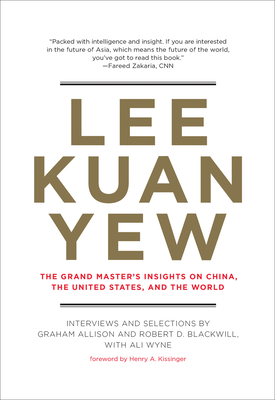 The grand strategist and founder of modern Singapore offers key insights and opinions on globalization, geopolitics, economic growth, and democracy in a series of interviews with the author of Destined for War, and others

“If you are interested in the future of Asia, which means the future of the world, you’ve got to read this book.” —Fareed Zakaria, CNN

When Lee Kuan Yew speaks, presidents, prime ministers, diplomats, and CEOs listen. Lee, the founding father of modern Singapore and its prime minister from 1959 to 1990, has honed his wisdom during more than fifty years on the world stage. Almost single-handedly responsible for transforming Singapore into a Western-style economic success, he offers a unique perspective on the geopolitics of East and West. American presidents from Richard Nixon to Barack Obama have welcomed him to the White House; British prime ministers from Margaret Thatcher to Tony Blair have recognized his wisdom; and business leaders from Rupert Murdoch to Rex Tillerson, CEO of Exxon Mobil, have praised his accomplishments. This book gathers key insights from interviews, speeches, and Lee’s voluminous published writings and presents them in an engaging question and answer format.

Lee offers his assessment of China’s future, asserting, among other things, that “China will want to share this century as co-equals with the U.S.” He affirms the United States’ position as the world’s sole superpower but expresses dismay at the vagaries of its political system. He offers strategic advice for dealing with China and goes on to discuss India’s future, Islamic terrorism, economic growth, geopolitics and globalization, and democracy. Lee does not pull his punches, offering his unvarnished opinions on multiculturalism, the welfare state, education, and the free market. This little book belongs on the reading list of every world leader.
Graham Allison is Douglas Dillon Professor of Government and Director of the Belfer Center for Science and International Affairs at the Harvard Kennedy School.

Robert D. Blackwill is Henry A. Kissinger Senior Fellow for U.S. Foreign Policy at the Council on Foreign Relations.

Ali Wyne is an associate of the Belfer Center.
“This short book [is] packed with intelligence and insight. If you are interested in the future of Asia, which means the future of the world, you’ve got to read this book.”
—Fareed Zakaria, CNN, “Book of the Week”

“Lee’s powerful intellect is captured in a new book, Lee Kuan Yew: The Grand Master's Insights on China, the United States, and the World. It’s a collection of interviews with him by Harvard University professor Graham Allison, Council on Foreign Relations senior fellow Robert Blackwill and Harvard's Belfer Center researcher Ali Wyne, while also drawing on other selected and cited writings by and about Lee. Now 89, officially retired and somewhat frail, Lee has mellowed with age—not unlike his creation Singapore, governed today with a lighter touch even as its citizens grow more vocal. Yet, as the book, and the adaptation here of the China chapter, reveal, Lee is as sharp, direct and prescient as ever. Though the volume was completed before China’s current territorial tensions with its neighbors, it helps expose, and explain, Beijing’s hardball mind-set.”
—TIME Magazine

“Graham Allison and Bob Blackwill have important questions to ask about China, America and the extraordinary impact of the relationship of those two countries on the rest of the world. For answers, they turned to Lee Kuan Yew, Singapore’s first premier and one of the world’s most formidable geopolitical thinkers and strategists. The result is a fascinating book called Lee Kuan Yew: The Grand Master's Insights on China, the United States, and the World.”
—Ian Bremmer, Reuters

“Lee Kuan Yew: The Grand Master's Insights on China, the United States, and the World forms a kind of last testament of the ailing, 89-year-old Mr. Lee. It is based on interviews with Mr. Lee by the authors—Graham Allison, a professor of government at Harvard’s Kennedy School, and Robert Blackwill, a former U.S. diplomat—to which the authors add a distillation of Mr. Lee’s speeches, writings and interviews with others over many years.”
—Karen Elliott House, Wall Street Journal

“Lee Kuan Yew: The Grand Master's Insights on China, the United States, and the World is an anthology of interviews and speeches Lee has given over the last four decades . . . readers will find themselves entertained and challenged by Lee Kuan Yew’s lucidity, powerful arguments and acerbic tongue.”
—Anchalee Kongrut, Economic Observer

“Lee is a force of nature. Up close and personal, he can blow you away with one overpowering dismissive glare. Has there ever been anyone like him? . . . [The book] will reinforce the consensus view that Asia bred something special in Lee.”
—Tom Plate, South China Morning Post

“Lee excels in pithy evaluations of regional and national strengths and weaknesses. At his best, the man is a cross between Confucius and Machiavelli.”
—Aram Bakshian Jr, Washington Times

“The authors, a team of eminent strategy thinkers, took the opportunity of recording [Lee Kuan Yew’s] views on the world, and the way it’s likely to take shape over the next quarter century. The result is this concise, but important book, that looks at the futures of China, the US and India, as well as important contemporary issues, from globalisation and democracy to Islamic extremism—all delivered in Lee’s characteristically incisive, and occasionally politically incorrect manner.”
—Anvar Alikhan, Outlook

“I found myself engrossed this week by the calm, incisive wisdom of one of the few living statesmen in the world who can actually be called visionary. The wisdom is in a book, Lee Kuan Yew: The Grand Master's Insights on China, the United States and the World, a gathering of Mr. Lee’s interviews, speeches and writings . . . He is now 89, a great friend of America, and his comments on the U.S. are pertinent to many of the debates in which we’re enmeshed.”
—Peggy Noonan, Wall Street Journal

“The contribution of Lee Kuan Yew: The Grand Master's Insights on China, the United States, and the World to the debate about Asia’s future is unique . . . [It] sets down the thoughts of an 89-year-old veteran of 20th century history with much to say about the future. The book is densely packed with Lee’s characteristically blunt assessments of issues, countries and people. The text has been deftly assembled and extensively footnoted.”
—Stephen Minas, LSE Review of Books

“[A]fter reading a good 20 pages, readers will be mesmerised by Lee’s lucidity and entertained by his acerbic tongue. After all, he is a good critic because he is not wholly shaped by ideology, nor does he try to be politically correct . . . The final chapter, ‘How Lee Kuan Yew Thinks’, reveals the human side of this formidable man and is a must-read . . . this book is a good read not only for students of politics, but also for readers interested in strategic thinking. Right-wing activists and liberal thinkers alike should read this book because gifted authoritarian figures such as Lee are increasingly rare.”
—Bangkok Post

“A perceptive and concise read, detailing the wisdom of a man who has been at the political forefront for close to 50 years . . . the book’s question-and-answer format [is] an ideal one—[Lee’s] responses were mostly short, sweet and most importantly, smart . . . [This book will] educate and enlighten by condensing the man’s vast intellect into accessible nuggets of information. [It] shows, again, why he is still one of the world’s most lucid thinkers.”
—Prestige Magazine

“[Lee Kuan Yew] may be the single best available volume for those who want a quick grasp of Lee’s thinking on foreign affairs and geopolitics . . . in compiling such a rich collection of statements on such a wide range of global issues, Allison and Blackwill have done both scholars and general readers a service by providing a manageable, one-stop shop on Lee’s thinking.”
—David Plott, Global Asia

“Relations between Asian powers and the United States are constantly shifting, so insights into how to navigate the resulting diplomatic challenges are at a premium. Singapore’s longtime prime minister, Lee Kuan Yew, is uniquely placed to offer such insights. In this book, he bluntly describes how he sees major players like China and the United States interacting in the coming years and sheds light on the intentions of each, with the purpose of informing experts and leadership in both capitals.”
—Foreign Service Journal