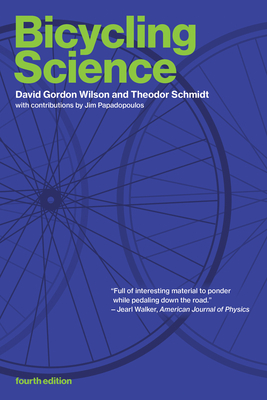 
In Stock—Click for Locations
An updated edition of a classic: an indispensable companion for a new era in cycling.

The bicycle is almost unique among human-powered machines in that it uses human muscles in a near-optimum way. This essential volume offers a comprehensive account of the history of bicycles, how human beings propel them, what makes them go faster—and what keeps them from going even faster. Over the years, and through three previous editions, Bicycling Science has become the bible of technical bicycling not only for designers and builders of bicycles but also for cycling enthusiasts.

After a brief history of bicycles and bicycling that demolishes many widespread myths, this fourth edition covers recent experiments and research on human-powered transportation, with updated material on cycling achievements, human-powered machines for use on land and in air and water, power-assisted bicycles, and human physiology. The authors have also added new information on aerodynamics, rolling drag, transmission of power from rider to wheels, braking, heat management, steering and stability, power and speed, and other topics. This edition also includes many new references and figures.

With racks of bikeshare bikes on city sidewalks, and new restrictions on greenhouse gas–emitting cars, bicycle use will only grow. This book is the indispensable companion for a new era in cycling.

David Gordon Wilson was Professor of Mechanical Engineering Emeritus at MIT. An acknowledged authority on human-powered transit and bicycle design—and the self-described “father of modern recumbents”—he was also a prolific inventor and an early advocate for a “carbon fee” to encourage the use of renewable energy.

Theodor Schmidt, a Swiss engineering consultant specializing in motive solar and human power, worked with David Gordon Wilson on several projects, initially within the International Human-Powered Vehicle Association. Schmidt was editor of Human Power and is now editor of Human Power eJournal.
Full of interesting material to ponder while pedaling down the road.—Jearl Walker, American Journal of Physics—

Bicycling Science … dispels the mythology that so commonly surrounds bicycle technology, while encouraging the passion riders feel for the sport.