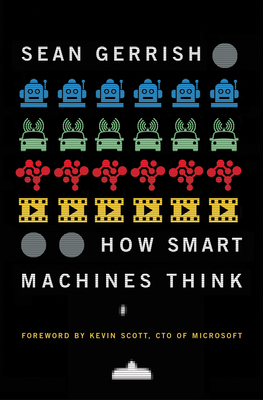 The future is here: Self-driving cars are on the streets, an algorithm gives you movie and TV recommendations, IBM's Watson triumphed on Jeopardy over puny human brains, computer programs can be trained to play Atari games. But how do all these things work? In this book, Sean Gerrish offers an engaging and accessible overview of the breakthroughs in artificial intelligence and machine learning that have made today's machines so smart.

Gerrish outlines some of the key ideas that enable intelligent machines to perceive and interact with the world. He describes the software architecture that allows self-driving cars to stay on the road and to navigate crowded urban environments; the million-dollar Netflix competition for a better recommendation engine (which had an unexpected ending); and how programmers trained computers to perform certain behaviors by offering them treats, as if they were training a dog. He explains how artificial neural networks enable computers to perceive the world—and to play Atari video games better than humans. He explains Watson's famous victory on Jeopardy, and he looks at how computers play games, describing AlphaGo and Deep Blue, which beat reigning world champions at the strategy games of Go and chess. Computers have not yet mastered everything, however; Gerrish outlines the difficulties in creating intelligent agents that can successfully play video games like StarCraft that have evaded solution—at least for now.

Gerrish weaves the stories behind these breakthroughs into the narrative, introducing readers to many of the researchers involved, and keeping technical details to a minimum. Science and technology buffs will find this book an essential guide to a future in which machines can outsmart people.
Sean Gerrish is a software engineering manager at Google. He has worked in various capacities on machine learning and data science projects at his current company and in a previous role as a quantitative engineer at Teza Technologies. He holds a PhD in machine learning from Princeton University.
"Gerrish offers a fresh and contemporary look at AI, machine learning, and deep learning by presenting the topics in light of how the technologies have surfaced in familiar memes like the Jeopardy TV game show, Netflix, video games like StarCraft, board games like Go, chess, Sudoku, and also self-driving cars."
—Inside Big Data

"An excellent primer for the engineer interested in putting AI in context."
—E&T Magazine

"If you want to discuss recent AI achievements with your students, such as how self-driving cars work, how Watson beat two of the best human Jeopardy! players, how NetFlix uses AI to recommend movies to people, and how AlphaGo beat one of the best human Go players, this book is for you."
—Getting Smart