The Chinese Typewriter: A History (Paperback) 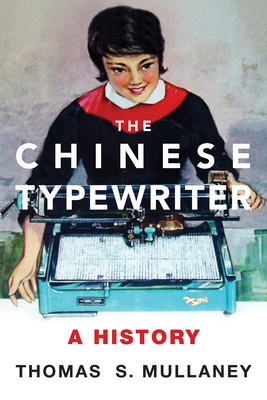 The Chinese Typewriter: A History (Paperback)


Not On Our Shelves—Ships in 1-5 Days
How Chinese characters triumphed over the QWERTY keyboard and laid the foundation for China's information technology successes today.

Chinese writing is character based, the one major world script that is neither alphabetic nor syllabic. Through the years, the Chinese written language encountered presumed alphabetic universalism in the form of Morse Code, Braille, stenography, Linotype, punch cards, word processing, and other systems developed with the Latin alphabet in mind. This book is about those encounters—in particular thousands of Chinese characters versus the typewriter and its QWERTY keyboard. Thomas Mullaney describes a fascinating series of experiments, prototypes, failures, and successes in the century-long quest for a workable Chinese typewriter.

The earliest Chinese typewriters, Mullaney tells us, were figments of popular imagination, sensational accounts of twelve-foot keyboards with 5,000 keys. One of the first Chinese typewriters actually constructed was invented by a Christian missionary, who organized characters by common usage (but promoted the less-common characters for “Jesus" to the common usage level). Later came typewriters manufactured for use in Chinese offices, and typewriting schools that turned out trained “typewriter girls” and “typewriter boys.” Still later was the “Double Pigeon” typewriter produced by the Shanghai Calculator and Typewriter Factory, the typewriter of choice under Mao. Clerks and secretaries in this era experimented with alternative ways of organizing characters on their tray beds, inventing an input method that was the first instance of “predictive text.”

Today, after more than a century of resistance against the alphabetic, not only have Chinese characters prevailed, they form the linguistic substrate of the vibrant world of Chinese information technology. The Chinese Typewriter, not just an “object history” but grappling with broad questions of technological change and global communication, shows how this happened.

A Study of the Weatherhead East Asian Institute
Columbia University

Thomas S. Mullaney is Professor of History at Stanford University and the author of Coming to Terms with the Nation: Ethnic Classification in Modern China.
...this gives us a fresh view of the issues...—New Scientist—

His theme – the preservation of characters, a basic element of Chinese culture, and how they entered, and became part of, the modern informational world – is well worth our attention.

Perhaps above all, Mullaney sheds multi-angled light on the remarkable battering that Chinese characters suffered throughout the twentieth century.

Mullaney does more than just deconstruct the myth of the unsuitability of the Chinese language. An important part of his project is to uncover the hidden history, alternatives, and trials and errors in the development of typewriters, especially Chinese typewriters, that has been buried by the triumph of the QWERTY keyboard. These fascinating and nuanced stories of design and engineering ultimately also form a history that decenters the single-shift QWERTY keyboard, which was mainly developed for English typewriting.

The Chinese Typewriter delivers the fascinating account of how the history of technology has played out over national and cultural boundaries. Theauthor also manages the impressive feat of making a highly technical story very readable.

The Chinese Typewriter is a richly textured, multi-tiered study not just of an artefact but also of an entire conceptual universe.

—The Journal of Design History—