Getting it Wrong: How Faulty Monetary Statistics Undermine the Fed, the Financial System, and the Economy (Paperback) 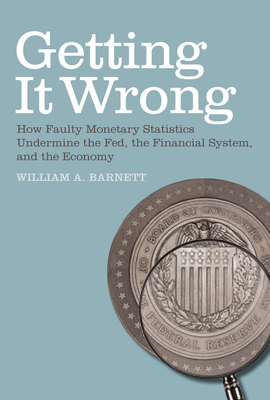 Getting it Wrong: How Faulty Monetary Statistics Undermine the Fed, the Financial System, and the Economy (Paperback)

By William A. Barnett, Apostolos Serletis (Foreword by)


Not On Our Shelves—Ships in 1-5 Days
A leading economist contends that the recent financial crisis was caused not by the failure of mainstream economics but by corrupted monetary data constructed without reference to economics.

Blame for the recent financial crisis and subsequent recession has commonly been assigned to everyone from Wall Street firms to individual homeowners. It has been widely argued that the crisis and recession were caused by “greed” and the failure of mainstream economics. In Getting It Wrong, leading economist William Barnett argues instead that there was too little use of the relevant economics, especially from the literature on economic measurement. Barnett contends that as financial instruments became more complex, the simple-sum monetary aggregation formulas used by central banks, including the U.S. Federal Reserve, became obsolete. Instead, a major increase in public availability of best-practice data was needed. Households, firms, and governments, lacking the requisite information, incorrectly assessed systemic risk and significantly increased their leverage and risk-taking activities. Better financial data, Barnett argues, could have signaled the misperceptions and prevented the erroneous systemic-risk assessments.

When extensive, best-practice information is not available from the central bank, increased regulation can constrain the adverse consequences of ill-informed decisions. Instead, there was deregulation. The result, Barnett argues, was a worst-case toxic mix: increasing complexity of financial instruments, inadequate and poor-quality data, and declining regulation.

Following his accessible narrative of the deep causes of the crisis and the long history of private and public errors, Barnett provides technical appendixes, containing the mathematical analysis supporting his arguments.

William A. Barnett is Oswald Distinguished Professor of Macroeconomics at the University of Kansas, Director at the Center for Financial Stability in New York City, and Senior Fellow at the IC2 Institute at the University of Texas at Austin. He is Editor of the eminent journal Macroeconomic Dynamics and is coauthor with Nobel Laureate Paul A. Samuelson of the book Inside the Economist's Mind, translated into seven languages. He was on the staff of the Federal Reserve Board from 1974 to 1982.
[A]n important contribution to our understanding of the $2 trillion meltdown.—Bloomberg—