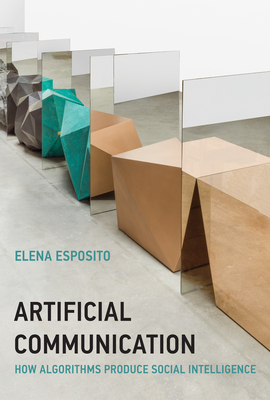 
Not On Our Shelves—Ships in 1-5 Days
A proposal that we think about digital technologies such as machine learning not in terms of artificial intelligence but as artificial communication.

Algorithms that work with deep learning and big data are getting so much better at doing so many things that it makes us uncomfortable. How can a device know what our favorite songs are, or what we should write in an email? Have machines become too smart? In Artificial Communication, Elena Esposito argues that drawing this sort of analogy between algorithms and human intelligence is misleading. If machines contribute to social intelligence, it will not be because they have learned how to think like us but because we have learned how to communicate with them. Esposito proposes that we think of “smart” machines not in terms of artificial intelligence but in terms of artificial communication.

To do this, we need a concept of communication that can take into account the possibility that a communication partner may be not a human being but an algorithm—which is not random and is completely controlled, although not by the processes of the human mind. Esposito investigates this by examining the use of algorithms in different areas of social life. She explores the proliferation of lists (and lists of lists) online, explaining that the web works on the basis of lists to produce further lists; the use of visualization; digital profiling and algorithmic individualization, which personalize a mass medium with playlists and recommendations; and the implications of the “right to be forgotten.” Finally, she considers how photographs today seem to be used to escape the present rather than to preserve a memory.